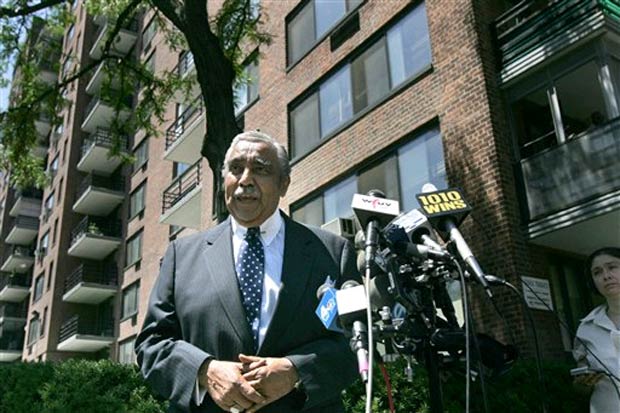 The NY Times' revelation that Representative Charles Rangel has four rent-stabilized apartments put the Congressman on the defensive yesterday. Rangel held an unusual sidewalk press conference, where he got testy with the NY Times reporters when not insisting his apartment situation was not so strange or a special favor--"Paying the legal rent is not a gift"--from his building's owner, the Olnick Organization which has in other cases kicked out rent-stabilized residents in favor of charging market rate rents. He said, "I don't see anything unfair about it, and I didn't even know it was a deal."

Rangel explained that two of the units were already combined when he first got them and that about 10 years ago, the apartment next door became available and the Rangels took it over. Per the NY Times:

“I got that apartment and I used that as my den and my office,” he said. “When I came in late at night from Washington I’d go in there first. It’s a studio apartment. It has its own kitchen and bathroom and no bedroom.”

He added: “I’m not apologizing to anyone for that.”

Rangel also said, "It is none of The New York Times' business where I decide to live.... Nor is it The New York Times' business how much space I think I need." He was also upset that the Times described his apartment as a penthouse because it's not; in fact, the Times noted that the apartment was called a "penthouse" in a book he and his wife apparently cooperated with--Style and Grace: African Americans at Home--while it's really on the second-from-the-top floor.

Rangel did say he would look into whether using another rent-stabilized apartment as a re-election office was improper. The House Ethics Committee is looking into whether the rent savings Rangel received--an estimated $30,000/year-- could be considered a prohibited in-kind contribution.

While residents and consultants alike were mixed on what this means for Rangel, the NY Times and NY Post both have editorials criticizing him. The Times writes, "On the most basic level, that means three or even four renters missed out in favor of a congressman who has a net worth of $566,000 to $1.2 million," and the Post recalls that Rangel ousted Adam Clayton Powell because Powell "enjoyed a sense of personal entitlement and declared that he didn't much care what anyone else thought of it."

#charles rangel
#Lenox Terrace
#new york times
#real estate
#rent stabilized apartments
Do you know the scoop? Comment below or Send us a Tip
A new Gothamist is coming! We’ve moved comments over to our beta site. Click here to join the conversation and get a preview of our new website.