Rudy Weighs In On 9/11 Ceremony Move 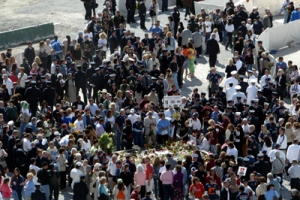 A group of September 11 victims' family groups have officially asked for permission to have this year's September 11 ceremony at Ground Zero. Last month, Mayor Bloomberg and Governor Spitzer sent a letter to families explaining that the ceremony would be moved to Zuccotti Park, because the World Trade Center site has a lot of construction. But families have been skeptical that the park will be able to hold enough people and call the space "sacred."

This week, Mayor Bloomberg held firm that families will have limited access to the site, saying, "Family members will be able to go there. What they just can't do is go down into the area. It's just not safe. Listen we have had enough tragedy down on that site and our first priority is to make sure that everybody is safe." Still, families want to get closer. Diane Horning, a representative one of the groups, told the AP, "This is the place we have. A precedent has been set in letting us touch ground zero." Bill Doyle, whose son died during the attack, told the Post, "They want to downsize 9/11."

Former mayor Rudy Giuliani added his 2 cents: "I feel very bad that it's going to be moved. I have a great emotional attachment to where it's taken place for the last five years. I can't go there without thinking about what happened on Sept. 11. I have real emotional attachment to its being there, and I wish the city would have it there." While that may be, Giuliani doesn't seem to have commented about rebuilding. We'll see where Giuliani winds up for the 9/11 anniversary, at the official event or at an alternative protest event by upset family members.