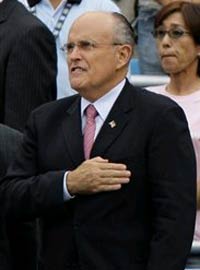 The Post says former mayor Rudy Giuliani is "launching a new fund-raising committee to dole out cash to New York GOP candidates." Which might open the door for him to run for governor in 2010.

Sure, there have been Governor Giuliani rumors since Spitzer's resignation and the main purpose of the new committee is raise money to retain Republican control of the Senate. However, some also believe the committee could help "rebuild his political clout after his disappointing presidential bid." Which in turn might help his consulting business.

There's still the distant possibility Mayor Bloomberg might be interested in heading to Albany with a run at the Governor's seat, given that he's a generous donor to the State GOP. A Siena College poll recently found that if Giuliani and Bloomberg went head-to-head, Giuliani would win. But if Giuliani ran against Governor Paterson, Paterson would win.

A Giuliani source told the Post, "Everything Rudy does this year is geared toward helping Republicans nationally and statewide, similar to the last three cycles, where he campaigned tirelessly on behalf of many candidates." Right, especially if he can maybe earn some coin to pay off his presidential campaign debt.

#election 2010
#fundraising
#governor paterson
#mayor bloomberg
#ny state
#rudy giuliani
Do you know the scoop? Comment below or Send us a Tip