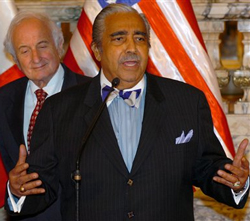 Rep. Charles Rangel spoke with WNBC newsman Gabe Pressman Friday evening for an interview that will air Sunday morning. He told Pressman that New Yorkers shouldn't favor Giuliani just because he's from their area or showed some type of leadership in the hours and days after 9/11/01. Rangel attributes Giuliani's positive impression as simply the product of filling a vacuum created by an absent-for-hours President Bush. While the Congressman appreciates that temporary performance, he hopes New Yorkers will recognize the larger impression he has of the current Republican candidate.

Rangel replied, "I don't think any federal prosecutor indicted more people that were subsequently acquitted than Giuliani. You know, he's a tough guy from the neighborhood that wants everyone to know how tough he is. He's the guy that calls the police to rally, cussing and fussing and bringing out the meanness in them as they drank beer and attacked David Dinkins. He polarized the city like no mayor's ever done."

When asked to account for Giuliani's popularity nationwide and among city voters, Rangel said that voters were deceived by a one-time event where non-partisanship held the day. The interview will appear on WNBC's News Forum, Sunday at 6:30 a.m.

Separately, and as if on cue to maximize political damage, Rudy Giuliani implied at a Thursday Reds-Dodgers game in Cincinnati that he spent as much time at Ground Zero, if not more, than uniformed rescue workers. Later, Giuliani backtracked on a national radio broadcast to say that he was speaking figuratively, more or less. The former mayor tried to explain that he was just identifying with Ground Zero workers and relating that he was "with them."

While some spent more time at Ground Zero than he did and others spent less, "I was there often enough so that every health consequence that people have suffered, I could also be suffering. People on my staff were there with me. Some of them weren't there as often as I was, and some of them have gotten sick already," he said.

Giuliani's association and reliance on 9/11 as a campaign issue is becoming a liability as much as an asset to the candidate. This video released last month features firefighters blaming Giuliani for the high loss of FDNY lives during the attacks.