Rudy "Loves to Spit in Your Eye" 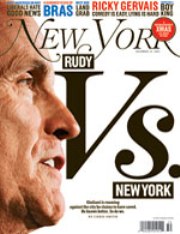 "Sleight of hand," "litany of needless fights," "ugly racial polarization" - just some of the phrases in this week's New York magazine's cover story about Rudy Giuliani, the former mayor turned presidential candidate. Chris Smith's article serves as both refresher to New Yorkers about Giuliani's reign as mayor with some fun tidbits (did you realize that then-Police Commissioner Bernard Kerik commissioned 30 miniature busts of himself?) as well as a cautionary tale to non-New Yorkers.

The main idea is summed up in the headline, "Rudy Has Seen the Enemy and He Is...Us," because his campaign is both about touting the greatness of New York and Giuliani's version of New York, which can be very different things. Sure, crime dropped in NYC, but there were also dramatic drops in San Diego, Boston and Austin, too - Giuliani happened to spin the story his way. And so the article goes.

Our second favorite quote is from Esther Fuchs, a Columbia professor who worked in the Bloomberg administration, “One of the most amusing things about Rudy is his crisscrossing the country speaking on ‘management.' City Hall didn’t even have functional e-mail when we arrived—in 2002!" Our first favorite quote: Former mayor Ed Koch, "He loves to spit in your eye. It’s character, not strategy. He’s acted reasonably polite since September 11, and he can be very charming. But unless you’re a saint, an epiphany does not make a permanent change in you. And he’s no saint.”

In other news, Giuliani and Senator Hillary Clinton are dropping in the polls, according to a USA Today/Gallup Poll: Rudy has dropped 9 points in a month (Huckabee is second with 16% to Rudy's 25%), while Hillary dropped 11 points (39%, with Obama at 24% in second). Giuliani wrote an op-ed in the Wall Street Journal about fiscal conservatism (read it here), Wayne Barrett says Giuliani has ties to a terror sheik and Bloomberg just says, about Giuliani's travel expenses, that since the Department of Investigations didn't follow up, it probably isn't anything.