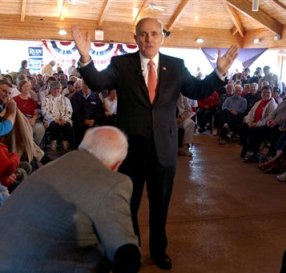 Rudy Giuliani told the American public, via a sit-down with Katie Couric, that the story pointing out expenses for trips to the Hamptons - to see then-mistress Judi Nathan - were billed across a number of obscure city agencies was a "typical political hit job" and a "debate day dirty trick." He even called it a "false story," but Politco, the website that broke the story, pointed out neither Giuilani or his aides "have questioned any of the facts reported by Politico."

Joe Lhota, who was a deputy mayor under Giuliani, said when police officers complained about not being reimbursed quickly enough, the mayor's office would use pre-paid American Express cards to pre-pay rental cars and lodging. What's funny is that Lhota told the Daily News that distributing security expenses across random city agencies has "gone on for years" and "predate Giuliani." But:

When told budget officials from the administrations of Ed Koch and David Dinkins said they did no such thing, Lhota caved Thursday, "I'm going to reverse myself on that. I'm just going to talk about the Giuliani era," Lhota said. "I should only talk about what I know about."

What's especially rich is the quote the NY Times got from former Police Commissioner Bernard Kerik: "There would be no need for anyone to conceal his detail’s travel expenses. And I think It’s ridiculous for anyone to suggest that the mayor or his staff attempted to do so.” Given that Kerik is currently indicted for tax fraud, it's just funny to hear Kerik discussing money.

Mayor Bloomberg's office confirmed that the expenses funneled through agencies like the NYC Loft Board were reimbursed, but City Comptroller William Thompson said, "Is that the preferred way of doing business? No, it is not. It does not lead to openness and transparency."

At the end of the day, Giuliani was the mayor and got the security he needed. But this story reminds everyone how Judi Nathan had a police security detail and how Giuliani's detail also was on the road with him while he was campaigning for the 2000 Senate race.

And no word on whether Giuliani thinks the front page NY Times story - about how various statements he's made on the presidential campaign trail have exaggerated or falsely stated the facts - is a hit job. For instance: "When a recent Republican debate turned to the question of fiscal responsibility, he boasted that 'under me, spending went down by 7 percent.".... an aide said Mr. Giuliani had meant to say that he had proposed a 7 percent reduction in per capita spending during his time as mayor."