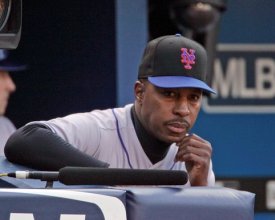 It was another Mets loss last night which means more questions about the fate of manager Willie Randolph. Lately, Randolph has been weathering fallout from comments he made earlier this week, suggesting SNY's camerawork of him was a little too negative.

Randolph wondered, to the Bergen Record's Ian O'Connor, why the media was okay with former Yankees manager Joe Torre's very laidback dugout demeanor, "Is it racial? Huh? It smells a little bit." Then he talked about being a black mananger/coach in professional sports.

Asked directly if he believes black managers are held to different standards than their white counterparts, Randolph said: "I don't know how to put my finger on it, but I think there's something there. Herman Edwards did pretty well here and he won a couple of playoff [games], and they were pretty hard on Herm. Isiah [Thomas] didn't do a great job, but they beat up Isiah pretty good. ... I don't know if people are used to a certain figurehead. There's something weird about it."

"I think it's very important ... that I handle myself in a way that the [African-American managers] coming behind me will get the opportunities, too ... ."

Yesterday, Randolph claimed he thought the comments were off-the-record and apologized, "I shouldn't have said what I said. It was a mistake...I take full responsibility for what I said out of frustration, and hope that we can put closure to this matter and focus on winning some baseball games."

The NY Times' Richard Sandomir took the "Willie Randolph Television Challenge" to see if Randolph was portrayed negatively on SNY. And Torre said he felt bad for Randolph, "It's a tough market. Willie is a good man, he's had success as a player and a manager. Unfortunately, with what happened last year, he's having to endure some things tough to endure."

Tonight, the Mets play the Braves in Atlanta--you can see it on SNY.

#baseball
#controversy
#mets
#sny
#sports
#willie randolph
Do you know the scoop? Comment below or Send us a Tip