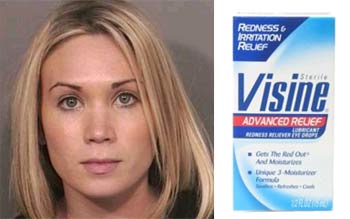 We always thought that Visine poisoning was an urban legend, but a crazy story from Long Island seems to suggest otherwise. Twenty-four year-old Kristine Anzalone has pleaded not guilty to second-degree assault and third-degree criminal mischief after being arrested for allegedly spiking her roommate's drink with Visine and then agitating his dogs to get into a fight.

According to Newsday, Anzalone and her husband Christopher lived with a male roommate in a North Bellmore home for a few months. But the three squabbled over rent as well as the roommate's smoking while Anzalone was pregnant. Last June, she allegedly gave the roommate an iced tea with "unknown amount of Visine," which does contain the chemical tetrahydrozoline. The roommate suffered intestinal distress, including vomiting and rectal bleeding, plus had trouble breathing and was admitted to the hospital.

Then, a few months later, after returning from a business trip, the roommate found his Chihuahua had been killed by his pit bull. A witness told him Anzalone used a cane to provoke the pit bull into attacking the smaller dog.

And then the roommate took the couple, now living in East Rockaway, to small claims court when Christopher Anzalone took his big screen TV. The Nassau police say that assault charges took time because of "reluctant witnesses" (the roommate found out about the Visine poisoning from friends). Anzalone's lawyer said, "The facts will show that she had nothing to do with this."