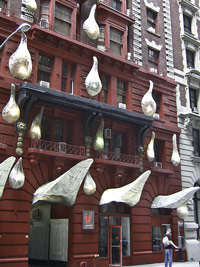 A 27-year-old rookie police officer turned a drunken assignation into a felony rape charge earlier this week. Kevin Johnson allegedly met a number of women at a midtown bar Monday night and accompanied them back to the Gershwin Hotel, where the women were staying on East 27th St. They were visiting New York for a hairdressers convention, and Johnson reportedly had consensual sex with one of them.

The alleged rape occurred when Johnson, who works in Brooklyn, crawled into bed with a second woman and proceeded to have intercourse with her while she was asleep. At that point, another woman awoke and started screaming before calling 911. Johnson has been suspended and relieved of his badge and gun.

Johnson remained at the scene, where he was arrested. He was later charged with multiple counts of rape and sexual abuse. The cop was assigned to the 73rd Precinct in Brownsville, Brooklyn. He's currently suspended but released on a $10,000 bond.

#cop
#gershwin
#hairstylist
#hotel
#johnson
#nypd
#rape
#rookie
#sexual abuse
Do you know the scoop? Comment below or Send us a Tip