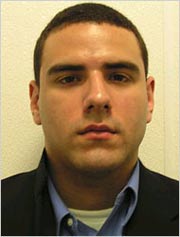 According to Pennsylvania authorities, a 21-year-old NYPD rookie cop stole $113,000 from a bank in Mulhenberg Township yesterday morning. Christian Torres was charged with robbery and held on $500,000 bail; he was also suspended from the NYPD.

The complaint described Torres wearing a black suit and approaching a bank employee who was arriving to work at 8 a.m., asking her about mortgage rates. She told him to wait until the bank opened, but he then forced his way in with a 9mm gun. Torres forced her and one of her colleagues to the vault.

Though Torres got away, a third employee had triggered the silent alarm. When he was pulled over, he said he was a NYPD cop, but the officers found the cash, his gun, a blond wig, and a derby hat in the car. Mulhenberg police officer Christopher Orvech said, "He was very calm, almost like he was going to talk his way out of it."

Torres' neighbors in Richmond Hill were shocked. One told the Post, "I'm shocked. That isn't like him. The cops came by a few times today, and I thought maybe he got into a fight. I can't believe he robbed a bank." But another cop complained about NYPD recruiting to the Daily News, "No matter what they say, we are getting a lot of losers. Anyone with any other options is taking another job. What's left are thugs and gangbangers who then get busted."

#Christian Torres
#crime
#Mulhenberg Township
#nypd
#robbery
#rookie cop
Do you know the scoop? Comment below or Send us a Tip