Ron Kuby To Cops: Give The Artists Back Their Snowden Bust, Please

The artists who created a bust of Edward Snowden for display in Fort Greene Park would like their creation back, please, and they've secured a prominent civil rights lawyer to get the job done.

The bust—100 pounds of high-grade, weather-resistant fiberglass—was snatched up by authorities within hours of its debut last Monday, ferreted away into the bowels of the 88th Precinct to be enjoyed by nobody. But there is hope: Attorney Ron Kuby, best known for his winning cases against Bernhard Goetz and for the Hells Angels, among many others, is demanding that police relinquish the sculpture on the basis that it constitutes public art, which the city has "consistently fostered" in parks "throughout the five boroughs." 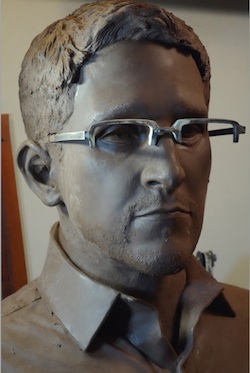 "Admittedly, the artists did not cross every procedural 't' and dot every procedural 'i' suggested in the Temporary Public Outdoor Guidelines," Kuby wrote in a letter addressed to Police Commissioner Bill Bratton. "However, representatives of the artists are in the process of filing a complete application in accordance with those guidelines, so that this important discussion about the nature of liberty and treason may continue."

The letter goes on to request that the sculpture be returned, based on a 1992 ruling which reads that "due process requires that the property [seized by the police] be returned upon unless the government can establish a...basis for its detention."

If and when cops turn over the bust, it will be displayed at Postmasters Gallery and submitted for a privacy and surveillance-themed art show at Boiler Space in May. "My clients are happy to provide a plaque indicating that the piece is 'On Loan From The NYPD Property Clerk,' if you would like," Kuby concluded.

The Prison Ship Martyrs Monument 2.0 (aka “The Snowden Statue”) was always meant to be a gift to the city, and in turn, the public. Its goal was to inspire thought and discussion over what ideals we cherish as Americans, and how these values determine who our heroes are.

Significant time, artistry and financial resources were poured into this statute to create a piece worthy of public display. As the artists behind this work, we hope New York City will release the statue so it may continue to spark healthy conversations about issues central to our freedoms.

We have been quite touched by the outpouring of positive online comments and support we’ve received for the statue, including galleries who have offered to display the piece. Public space and free speech advocates have also shown support for making it viewable to the public. We feel the piece would offer a great deal of good if it were legally exhibited through the Parks Department's “Arts in the Parks” program, which has consistently fostered the creation and installation of temporary public art in parks throughout the five boroughs.

By releasing our sculpture the NYPD has an amazing opportunity to show it protects not only its people, but also honors the city's long history as a benchmark for creative expression and free thinking.

An officer who answered the phone at the 88th Precinct denied any knowledge of the bust being in the station house, nor would he confirm that it was "sitting next to the coffee maker."