Romney Drops Out of Primary Race 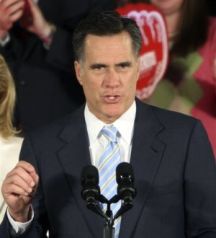 The specter of a Mormon multimillionaire as president has been lifted; Mitt Romney announced his withdrawal from the Republican primary race this afternoon. Romney used his speech to the Conservative Political Action Committee to declare: “If I fight on in my campaign, all the way to the convention, I would forestall the launch of a national campaign and make it more likely that Senator Clinton or Obama would win.” Wonkette liveblogged the speech to great comic effect.

After outspending and losing the Iowa caucuses to Mike Huckabee, and then losing the New Hampshire primary to John McCain, Romney never seemed to have any momentum in these first few weeks of the year. The former governor of liberal Massachusetts had been unable to shake the dreaded “flip-flop” sobriquet after changing his position on issues such as abortion rights

On the Republican side, it looks like the race is now McCain’s to lose, despite Huckabee surging after his Super Tuesday wins. On the Democratic side, there is an increasing likelihood that the race will come down to a nasty floor fight at the Democratic convention, especially if Clinton goes through with her plan to try and seat the delegates from Florida and Michigan. The candidates had previously agreed to ban delegates from those states because their legislatures moved their primaries up in the calendar without approval from the DNC; Clinton was the only candidate on the ballot in Michigan.