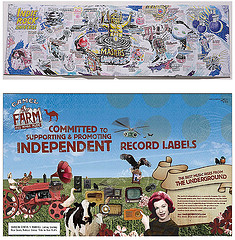 Last month in Rolling Stone's November 15th issue, the magazine turned 40 -- and while going "over the hill" they may have crossed the line. The issue contained a four-page fold-out section called Indie Rock Universe, which amongst other things included the names of Indie's elite.

This "universe" was discovered when the pages of a fold-out "butterfly gate" ad for Camel cigarettes was opened up. This is where the lines began to blur, as the Camel ad was for their Farm Campaign and stated: "Committed to Supporting & Promoting Independent Record Labels." This has all led to what Pitchfork has now dubbed Camelstonegate (we might have gone with Rollingsmokesgate).

The NY Times called upon the Campaign for Tobacco-Free Kids to get their take on this mess, and the president of that foundation said, “This is one great big cigarette ad. The fact that Rolling Stone produced the content, but displayed it in such a manner that it is indistinguishable from the Camel ad, only makes them an accomplice." The "article" contained illustrations, which may violate the 1998 settlement between tobacco companies and state attorneys general stating cartoons cannot be used in cigarette ads. Over the weekend, some artists included in the piece filed suit.

Indie rock bands Xiu Xiu and Fucked Up today filed a class action lawsuit against R.J. Reynolds Tobacco Company and Wenner Media, all in regards to the ‘Indie Rock Universe’ multipage advertising section. The class action, which was instigated by Xiu Xiu and Fucked Up but filed on behalf of 186 bands and artists featured in the pull out spread, accuses both the cigarette company and the magazine of engaging in “despicable conduct” that was “illegal under settled, unambiguous California statutory and common law.” The lawsuit demands Rolling Stone publish an admission that the artists’ names were used without consent in a spread equal in size to the original ad, as well as seeking actual and punitive financial damages.

They should each demand to be on the cover! And Camel should have just stuck with Dinosaur Jr. and Dr. Dog. Though we wonder how many of those 186 bands filing suit actually do smoke cigarettes.