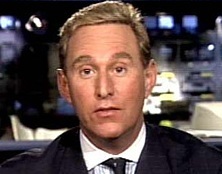 When will our new issue of the New Yorker come? Because the infamous GOP operative Roger Stone tells writer Jeffrey Toobin how he learned of former Governor Spitzer's love of "ladies of the night"--and by the looks of Page Six's first look, it's a must-read!

Stone (who may or may not have left a rude voicemail on Spitzer's dad's phone calling Eliot a "phony, psycho piece of s---") has previously claimed credit for helping tip off the feds about Spitzer. Now he explains in much more detail how he figured out a "hot blonde" hooker had met with Spitzer. Excerpts of NYer article, via Page Six:

"She told me she had a very high-end clientele - she kept using the word 'high-end' - athletes, international businessmen, politicians . . . then she said, 'I almost had a date with Eliot Spitzer, the governor of New Jersey.' She didn't know much about politics. So I asked her, 'Did this guy have a beard?' [like whiskered Jon Corzine]."

She said, no, he was a skinny, bald guy, Stone tells Toobin. She added that Spitzer had reached her through her escort service that listed her as a brunette. But since she'd recently gone blonde, the agency referred Spitzer to a dark-haired colleague who hooked up with him in Miami.

#eliot spitzer
#hooker
#hookergate
#new yorker
#Roger Stone
Do you know the scoop? Comment below or Send us a Tip