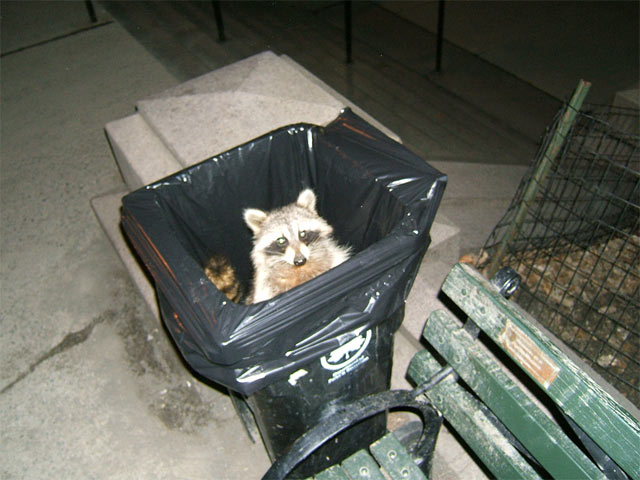 Photo of a Central Park raccoon from ñ's flickr

Human intruders aren't the only worry amongst New Yorkers--now wildlife is encroaching upon residences throughout the city, especially in Brooklyn. Many blogs have been reporting neighborhood sightings, and now the NY Times jumps in with a look at raccoons paying visits to human neighbors.

One Midwood family who found raccoons in their attic laughed it off while they called in a wildlife trapper, cut down a tree and replaced a roof to rid themselves of their unwanted tenants. And another family found a raccoon inside their kitchen--eating their cat's food--courtesy the cat door in the basement:

[Nelson] Ryland rose from his chair and yelled as he saw a large raccoon scoot down the basement steps and then watched it flee out the cat door. Mr. Ryland shut the metal door. What he did not realize is that raccoons have highly dexterous front feet, which are shaped like human fingers. A short time later, the raccoon had returned and had resumed snacking on the cat food.

As Mr. Ryland chased it downstairs a second time, he could not help but admire how deftly the animal lifted the metal door and slipped out into the night. “I have to have a certain amount of respect for them,” he said. “They’ve managed to survive in this tough city like the rest of us.”

Since there have been a rise in 311 calls reporting raccoons, it's possible the population has grown. While the furry ones can be cute and even curious enough to approach humans, one main concern is rabies -- and this year eight raccoons found in the city have tested positive for it. In the past, raccoons have attacked in Prospect Park, taken on the hipsters of Williamsburg, and most recently run rampant in Green-Wood Cemetery. In the end, most New Yorkers respect the raccoons, after all, "they’ve managed to survive in this tough city like the rest of us.”

#animals
#brooklyn
#raccoon
#raccoons
#wildlife
Do you know the scoop? Comment below or Send us a Tip