Rocket Gets Righteous on Roids 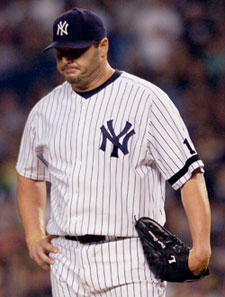 Roger Clemens is certainly good at issuing statements. Last week it was a vehement denial of the Mitchell Report findings, this week it is a denial and a lecture. Clemens’ agent released a statement yesterday that included the following:

"I am disappointed that my 25 years in public life have apparently not earned me the benefit of the doubt, but I understand that Senator Mitchell's report has raised many serious questions. I plan to publicly answer all of those questions at the appropriate time in the appropriate way. I only ask that in the meantime people not rush to judgment."

It sounds good in theory, but it fails to answer the question of why didn’t Clemens talk to Mitchell when he was given the opportunity to do so? On Page 175 of the report Senator Mitchell states “In order to provide Clemens with information about these allegations and to give him the opportunity to respond, I asked him to meet with me; he declined.” So, like almost everyone else named in the report, Clemens chose to ignore Mitchell when asked to help the investigation.

And, now that Andy Pettitte has confirmed Brian McNamee’s accusations against him, the “evidence” against Clemens becomes more believable. But, that may be the least of Clemens’ problems because Congress is interested in his situation. If they call him to testify he would be under oath, then we would really get to see him in a pressure situation.

Photo of Roger Clemens during the ALDS by AP/Bill Kostroun