Rockaway to Wall St., by Land and by Sea 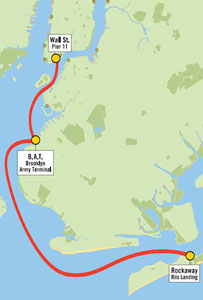 This morning, New York Water Taxi introduced their new commuter ferry route for residents of the Rockaways in Queens. While it's not a straight shot--it stops once at the Brooklyn Army Terminal--it will move up to 400 commuters from Riis Landing to Wall St.'s Pier 11.

The ferry service can almost guarantee a commute time of 60 minutes--there's not a lot of traffic on the water that can't be avoided. The return trips depart Manhattan at 3:30 p.m. and 5:30 p.m., which doesn't seem particularly work-friendly for daily commuters (the morning trips leave Riis Landing 5:45 and 7:45 a.m.). Rides costs $6 each way, with no discount for a 10-trip package--there is a 10% discount on the 40-trip package.

In comparison, one can take the A train from Broad Channel 105th St. in Rockaway and arrive on Nassau St. in Manhattan in about 53 minutes, according to Trips123's transit planner. Despite recent fare hikes, the trip would be significantly cheaper, especially with an unlimited Metrocard. A subway commute downside is the possibility of delays and service disruptions. And it could be cheaper, given the cost of gas and parking, than driving in.

Currently it's just weekday service, with summertime weekend schedules will be announced in a few weeks. Given weekend service disruptions, it seems like there's a real opportunity for New York Water Taxi to boost weekend service as quickly as possible, just so people can get in and out of the city in under five hours.