Rock and Roll Hall of Fame Coming to New York 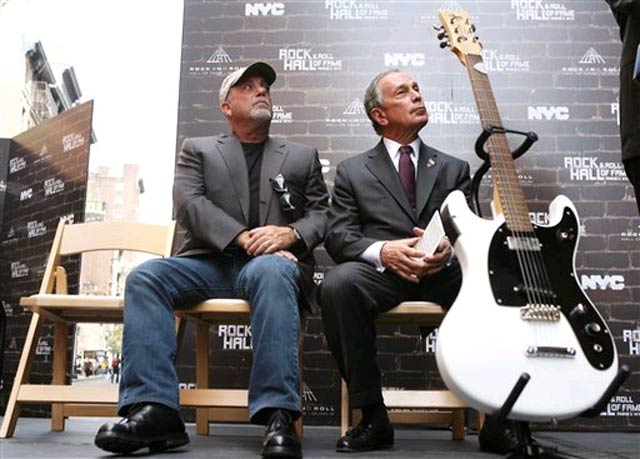 Photograph of Billy Joel and Mayor Bloomberg by Seth Wenig/AP

Alongside Billy Joel and record exec Clive Davis, Mayor Bloomberg announced today that the Rock and Roll Hall of Fame will open its first annex in Soho. The 25,000 square-foot annex will open at 76 Mercer Street where for $26, music fans can see Bruce Springsteen's first car and the phone booth from CBGB's. Both were on display as Bloomberg made the announcement today.

The Rock and Roll Hall of Fame opened in Cleveland in 1996 and this marks its first satellite expansion (a Las Vegas branch is also in the works). Bloomberg said that New York was a natural choice because "this is where Lou Reed took a walk on the wild side." The museum's president Terry Stewart said that the annex will "increase its visibility overall and drive tourist traffic to Cleveland." The NYC branch will feature an "immersive theater," items from the Cleveland museum, and an exhibit called "New York Rocks" which will map NYC locations with musical significance and offer items like Billy Joel's notebook with lyrics for "The Stranger."

Joel, a Rock and Roll Hall of Famer since 1999 was on hand and regifted a baseball bat autographed by David Wright that he received during the final two concerts he performed at Shea Stadium last month. “New York gave me my words and my music,” Mr. Joel said, “and rock ’n’ roll gave me a place for that music to live.”