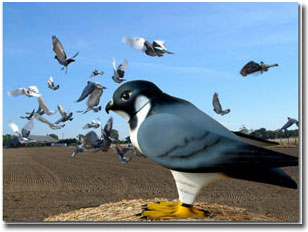 Earlier this year Central Park crowds looked on in horror as a hawk dug his talons into a squirrel. Now the pigeons of New York are being targeted as the city considers bringing in robotic hawks to perch on rooftops.

Newsday reports that robo hawks could be a weapon for driving pigeons from city sidewalks; an idea brought in last year by Brooklyn Councilman Simcha Felder. Just how much will it take to rid the city of its huge pigeon problem?

Felder is proposing a bill that would fine people $1,000 for feeding the birds and would create a "pigeon czar" to be responsible for pigeon-related matters, such as cleanup. He expects a council hearing on the legislation, which is still being drafted, to be held before the end of the year.

The pigeon czar will allegedly be backed by an army of robotic hawks, and while they're not a part of Felder's bill, he mentioned they "could be an option if the Bloomberg administration feels the high-tech scarecrows are a good investment."

The faux hawks could be a solution to Astoria's squirrel problem too, but they aren't a cure-all or necessarily a workable solution for the city; the Robop (pictured) was designed for much smaller areas. But at about $4500 a pop, the city would just need to catch a few (hundred) pigeon feeders to fine in order to stock up on the robo hawks.

#Councilman Simcha Felder
#faux hawk
#hawk
#pigeon
#robo hawk
#Robop
#robotic
Do you know the scoop? Comment below or Send us a Tip