Robert Durst Arrested, Apparently Admits To Murders On The Jinx

A wealthy member of one of New York City's most powerful real estate families has been arrested and faces murder charges. Robert Durst, 71, whose life is currently the subject of a five-part HBO documentary series (the finale is tonight) was arrested in New Orleans yesterday on extradition charges that were brought in Los Angeles County. Durst's attorney confirmed to an ABC affiliate that the charges were for murder.

Durst's attorney told the affiliate that his client would not fight the extradition charge, and that he plans on contesting the murder charges in Los Angeles. 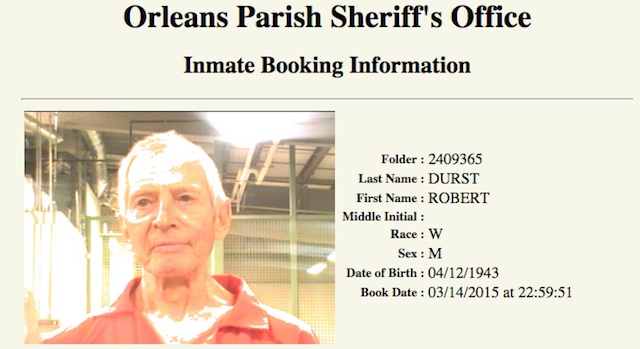 Durst was acquitted of murdering and dismembering his neighbor in Galveston, Texas in 2002; he was also suspected of murdering his friend Susan Berman in LA in 2000, and Durst's wife went missing in Westchester County in 1982. Durst felt the need to proclaim his innocence to documentarian Andrew Jarecki for the series called The Jinx, which in retrospect seems like a poor choice.

The LA Times reports that police were recently conducting new interviews in the Berman case, which may have led to Durst's arrest.

A spokesman for the Durst Organization, which controls 4 Times Square and One Bryant Park, did not immediately respond to our request for comment.

[UPDATE] In a statement, Durst's brother, Douglas Durst, chairman of the Durst Organization, said, "We are relieved and also grateful to everyone who assisted in the arrest of Robert Durst. We hope he will finally be held accountable for all he has done."

[UPDATE] In the final episode of the documentary, Robert Durst was recorded confessing to the murders:

“What the hell did I do?” Mr. Durst whispers to himself in an unguarded moment caught on a microphone he wore during filming. “Killed them all, of course.”

The recording occurred when Durst used the bathroom without removing a microphone:

Near the documentary’s end, the filmmakers were packing up their equipment when Mr. Durst asked to use the bathroom. He did not remove his wireless microphone as he closed the door, however, and began to whisper to himself.

More than two years passed after the interview before the filmmakers found the audio.

#durst organization
#murder
#robert durst
#the jinx
Do you know the scoop? Comment below or Send us a Tip