Robert Chambers Headed Back to jail 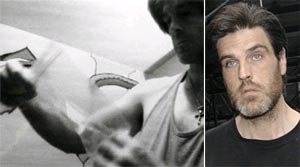 In a change of plans, Robert Chambers decided to accept a plea deal and pleaded guilty to charges of selling cocaine and assaulting an officer during an undercover drug sting last year. Police had found Chambers, who gained infamy in NYC as the "Preppy Killer" for killing Jennifer Levin in 1986, and his girlfriend selling cocaine in her apartment.

Previously, Chambers's lawyer said he would use a psychiatric "poly-substance abuse" defense, because Chambers was so influenced on drugs (apparently he had been doing 10-12 bags of heroin a day, not to mention smoking crack and pot and abusing painkillers). If he faced a trial and were convicted, Chambers would have been in jail for life.

Now the 41-year-old will be sentenced to 19 years and 4 months--which is longer than his 15-year sentence for killing Levin and a possibly less than Manhattan DA Robert Morgenthau's expectation that Chambers would be in jail for the rest of his life. His girlfriend Shawn Kovell pleaded guilty and was released, and may substitute a lesser plea if she stays out of trouble over the next year.

Levin's mother told the Daily News, "That's good. He was guilty, and I don't know what else he could have pleaded." However, former DA Linda Fairstein who prosecuted Chambers in the Preppy Murder said to the Times, "I think he’s somebody who should never walk among us again. He’s been given chance after chance after chance. He took the life of a friend — an 18-year-old girl — with his bare hands.”