Robbery a Possible Motive in Meals on Wheels Deliveryman's Murder 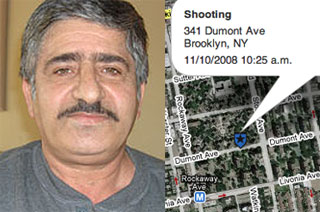 Police suspect that the fatal shooting of a Meals on Wheels deliveryman at Brooklyn's Brownsville Houses yesterday morning may have been prompted by a robbery attempt. The Daily News reports that Emanuel Aminov's "wallet was found empty near the body, leading investigators to believe that robbery was the motive for the lethal ambush." His wife told the NY Times, "He was delivering food to poor people, and they shot him down."

Aminov, who immigrated from Tajikistan two decades ago and lived in East New York, was previously a livery driver; he worked for the Jewish Association for Services of the Aged as a floater, someone who filled in for others drivers during Meals on Wheels deliveries. He had just delivered food to Gertie Johnson, 73, before someone fired a shot into his chest. Johnson heard the shot and asked her granddaughter, "Was that a shot?"

Another resident, Tashia Dunbar, 15, told the Post, "I heard one shot, then a lady crying. She was screaming, 'He brings me breakfast!' I came down, and I saw the guy. He was hit in the stomach... just laying there, not moving. He was unconscious.... It's shocking. I ran upstairs and called the ambulance." Aminov later died at Brookdale Hospital.

Aminov's sister and nephew claim he was afraid of going tot he Brownsville Houses (his sister added she wanted his killer "to be punished for the rest of his life"). The police are looking for a black man in his 20s, wearing a black hooded sweatshirt. There is also surveillance camera footage, but it's unclear how much of the shooting was caught on film. A neighbor lamented to the Times, "They bring nice meals — chicken, beef stew, all kinds of things. They can’t go around killing people like that. It’s a depressing day. It’s crazy.”

#Brownsville Houses
#Emanuel Aminov
#gun violence
#meals on wheels
#murder
#shooting
Do you know the scoop? Comment below or Send us a Tip