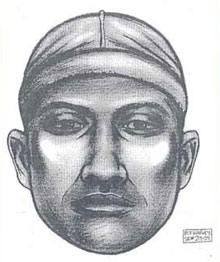 The police are searching for a man who robs subway passengers during their morning commutes. He targets his victims on the subway platform, grabs their purses and then runs into the subway tunnels.

The suspect has committed four robberies in the past five days, all during the morning rush hour, all with female victims. Here's a list of the robberies, via WNBC:

The man first struck at approximately 8:30 a.m. Sunday on the L subway at 14th Street and First Avenue, police said. The man approached a 24-year-old female who was sitting on a platform bench, grabbed her purse and then fled, police said.

Two days later, at about 9:20 a.m. on the 1 subway at Seventh Avenue South and Christopher Street, the suspect approached a 38-year-old woman, grabbed her purse and then fled.

The next morning, at about 9:05 a.m., the same man is believed to have approached a 30-year-old woman on the L subway at 14th Street and Third Avenue, grabbed her purse and then fled into the subway tunnel for a third time.

His most recent attack was just after 7:30 a.m. on the northbound 6 platform at Lafayette and Bleeker streets. He is said to have approached a 27-year-old woman’s purse before fleeing into the subway tunnel.

The NYPD released a sketch of the suspect, described as a man who is age 30 to 35 years old and approximately 5'9", with a medium build. Call Crimestoppers (800-577-TIPS) with any information.