While the City Council's Transportation committee spent more than five hours on Wednesday discussing a package of legislation aimed at legalizing throttle e-bikes and electric scooters in NYC, the fate of the bills may ultimately be tied to Albany.

The bills would legalize the kinds of e-bikes that are predominately used by the city's immigrant delivery cyclists, and also the e-scooters that have been popularized in San Francisco and Washington, D.C., both of which are currently illegal under New York State law.

But last week, Governor Andrew Cuomo addressed the demand for the vehicles by putting a provision in his 2019 budget that would allow localities to legalize e-scooters and e-bikes.

Department of Transportation Commissioner Polly Trottenberg told City Council members at Wednesday's hearing that the de Blasio administration was waiting for Cuomo's proposal to be fleshed out before embracing any legalization efforts at the city level.

"We want some clarity from the state on what the legal framework would be for both e-bikes and e-scooters," Trottenberg said.

Committee Chair Ydanis Rodriguez, who is co-sponsoring the legislation along with Councilmember Rafael Espinal and Councilmember Fernando Cabrera, insisted that the city could and should move forward,

"The time is now to legalize e-bicycles and electric scooters," Rodriguez said.

Another puzzling aspect to the legislation: one bill would legalize e-scooters, which use a throttle, while another would create a program for delivery cyclists to retrofit their bikes and remove their throttles, turning them into the same kind of pedal-assisted e-bikes that Citi Bike has on the streets.

"We’re asking the city to remove the throttles form the e-bikes while simultaneously legalizing e-scooters powered by electric throttles," said Brooklyn Councilmember Carlos Menchaca, who supports legalizing e-bikes but expressed deep skepticism of e-scooter companies, who are eager to drop their product onto city streets.

After the hearing, a spokesperson for one co-sponsor of the legislation acknowledged that given the governor's proposal, "We might have to change our approach."

In a statement, City Council Speaker Corey Johnson said that he is still weighing the legislation. "I still have concerns regarding the effects e-scooters and e-bikes could have on public safety, but as I’ve said from the beginning, I am open to them in some form if we can sort out the legal issues and make it happen safely." 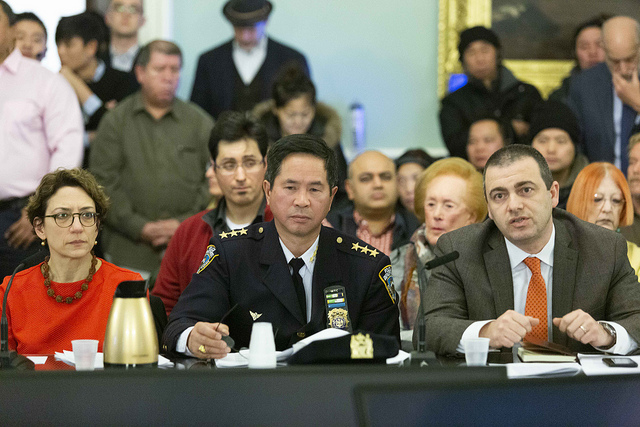 For much of the day the hearing room was packed with delivery cyclists and advocates who have been urging the council to end what they say is a clear double standard in policy: pedal assist e-bikes are legal for well-off commuters, but low-income workers are pulled over and fined $500, while their e-bikes are confiscated.

The NYPD's Chief of Transportation, Thomas Chan, who gave no prepared remarks, testified that the department confiscated 1,215 e-bikes in 2018, and issued 1,154 e-bike summonses to individuals, and 167 e-bike summonses to commercial businesses. (These numbers are considerably higher than those provided to Gothamist last week.)

Oleg Chernyavsky, the NYPD's head of legislative affairs, said that in addition to those summonses, the department issued 1,362 moving violations to e-bike cyclists, and said this was "anecdotal" proof that police officers are targeting illegal behavior, not immigrants.

"What that shows is there's no targeting of delivery individuals, it shows there's a targeting of a dangerous individuals," Chernyavsky said, though he admitted that the NYPD could not say how many of the 1,154 individual e-bike summonses came with moving violations.

As for why NYPD e-bike enforcement is still so lopsided against individual delivery cyclists, when the law requires police to fine businesses, Chernyavsky said that it was challenging for officers to cite businesses.

"If they are operating for commercial purposes, sometimes they're not affiliated to a particular establishment, they're independent contractors, so there isn't a business" to fine, Chernyavsky said.

During the hearing, neither the DOT nor the NYPD cited any injuries resulting from e-bike riders striking pedestrians.

A spokesperson for Uber Eats said that the company had received e-bike fines, but would not say how many. The company supports legalizing both e-bikes and e-scooters. Spokespeople for Seamless and Grubhub, which combined control 85 percent of New York City's food delivery market, did not return our requests for comment.

Legal Aid attorney Steven Wasserman later testified that out of the dozens of e-bike delivery cyclists that he has represented over the last four months, "there were perhaps only one or two who were committing traffic infractions while they were stopped."

"The police often just deploy themselves near the bike lanes and just wait for a passing bicyclist and confiscate their bikes. It's plain that they're in the process of delivering food," Wasserman said. "These workers are really helpless. It's almost impossible for themselves, within their economic situation, to bring themselves in compliance with the law."

Anyone who orders delivery should watch this video. This is how New York City criminalizes its delivery workers. #DeliverJustice pic.twitter.com/99wPUYqbC8

"Conversion should not be that difficult if we really, really, want to help these hard working people who are just trying to make a living," Chin said.

Trottenberg responded that the DOT has studied how a conversion program would work, but that getting bike shops around the city to participate and convert bikes in a legal and safe way was inordinately complex. "It's not for a lack of trying," she said.

Councilmember Antonio Reynoso commented that the intense debate over e-bikes and e-scooters "speaks to the car culture problem."

"The administration has a backwards approach," Reynoso said.

Clemente Rodriguez, a 45-year-old delivery cyclist from Brooklyn, attended a rally outside City Hall before the hearing in support of legalizing e-bikes.

Rodriguez said he needs an e-bike to support his four children, and that his bosses require him to use it. He said he has been pulled over three times by the NYPD.

"I have to work really hard to pay off the fines, because I don't want any problems with the police," Rodriguez told Gothamist, adding that it takes months for him to pay a $500 ticket.

"If this legislation passes we will not be in as much fear from the police and we'll be able to do our jobs safely and efficiently."

#e-bike crackdown
#e-bikes
#e-scooters
#nypd
#original
Do you know the scoop? Comment below or Send us a Tip