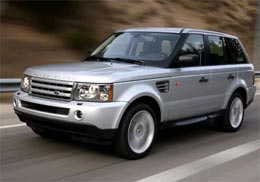 Yesterday, the Post reported about a strange and disturbing road rage incident in Red Hook last week. A woman was ultimately repeatedly hit by the driver of a Land Rover.

According to police sources, on Thursday afternoon, the woman got out of her car to speak with 63-year-old Jeffrey Klempner, who was in his SUV at Columbia Street and Atlantic Avenue, "to talk to him about an earlier collision." Klempner "denied any wrongdoing," but when the woman walked towards a patrol car, he "allegedly" drove into her and hit her four times "at a slow speed." Police arrested him for assault and reckless driving. The woman was treated for bruises at Long Island College Hospital.

The NY State Police differentiates road rage ("using the vehicle as a weapon or physically assaulting a driver or their vehicle") and aggressive driving (operating "a motor vehicle in a selfish, bold or pushy manner, without regard for the rights or safety of the other users of the streets and highways"). Specifically, road rage is a criminal offense. The State Police even had road rage vans at one point.