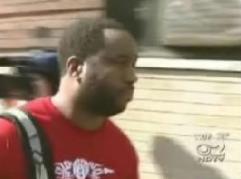 Police officer Sean Sawyer was released and not charged after confessing to shooting an unarmed man in Harlem during a road argument early Sunday morning. The Manhattan DA's office claimed that Sawyer could have been acting in self-defense, because the other driver, Jayson Tirado, suggested he had a gun when he gestured and yelled at Sawyer. DA Robert Morgenthau said the "case is under investigation and is going to go to a grand jury. When there's a claim of self-defense, there is no immediate arrest."

It turns out that Sawyer did not leave his car and that he was not given a Breathalyzer, since he turned himself in 19 hours after the shooting took place, and some reports say he may have been drinking before the incident. Here's the series of events that led to the shooting, from Newsday:

Sawyer and Tirado got into an argument as each was trying to squeeze off the congested East 116th Street exit of the Harlem River Drive, where police were investigating a fatal motorcycle accident.

Both drivers headed up First Avenue, and when Tirado cut Sawyer off at East 117th Street, the tensions escalated, police said.

According to Jason Batista, 21, one of two passengers with the victim, Tirado pretended he was reaching for a gun, pointed at Sawyer and said, "You want to see Mr. Ruger?" a reference to the make of gun, sources said.

It wasn't clear whether Sawyer heard what was said, but Batista told police it appears Sawyer opened fire from his car when he saw the "gun" being pointed at him, sources said.

It was also reported that Sawyer said, "Don't you know how to drive?...I’m going to have to cap one of you," to Tirado's car, first initiating the confrontation. Sawyer, who has been suspended without pay, was tailed by the media when he left his home on West 102nd Street. He said, "This guy is a human being, of course you're going to feel bad...I just wish it would have been different." Sawyer's brother Chris said, "We'd like to apologize deeply for what happened. We wish [Tirado's] family the best and we are praying for them." 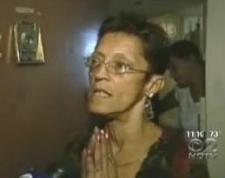 However, Tirado's mother Irene was angry "My son was a good kid. I want [Sawyer] fired. I won't rest. They [the police?] have not called me, they have not come to my house, they have not told me when my son died, what time." She also referred to Sawyer as acting like a "reckless teenager" and said, "Why couldn’t he say, ‘Stop,’ and pull to the side like a normal policeman?...I don’t want to know him; I don’t want to forgive him. don’t want him to be a policeman ever again.”

The Reverend Al Sharpton will speak at a press conference at First Avenue and 120th Street, where Tirado stopped his car (three blocks from where he was shot) at noon, with Tirado's family present. And Tirado's friends and neighbors spoke to the NY Times: "I lost one of my friends that I grew up with and I loved him dearly.”