Rite Aid Workers Take To The Streets Over Benefit Cuts

According to SEIU 1199, the union that represents the workers and organized the march, Rite Aid currently owes the union's benefits fund millions of dollars. A spokesperson for the union explained that Rite Aid employees were previously covered by health insurance through the benefit fund, but last week were cut due to the firm's lack of payment. The employees are now on Rite Aid's own benefit plan, which they claim is inferior to the union plan.

Negotiations between Rite Aid and the union over a new contract have been stalled since 2015—a particular sticking point has been the company's demand that future pharmacists be on a separate contract. 1199 has filed unfair labor practice complaints against Rite Aid with the National Labor Relations Board, which is currently investigating.

Protesters marched from Columbus Circle through Times Square to the Rite Aid on 50th Street and Eighth Avenue, where they gathered for speeches from the mayor, 1199 president George Gresham, and an employee at the Rite Aid branch. "You've heard of the Grinch who stole Christmas, right? Well, Rite Aid is the Grinch trying to steal your Thanksgiving," de Blasio said. "How does a company that's making so much money try and take away the basics from the people who work there? 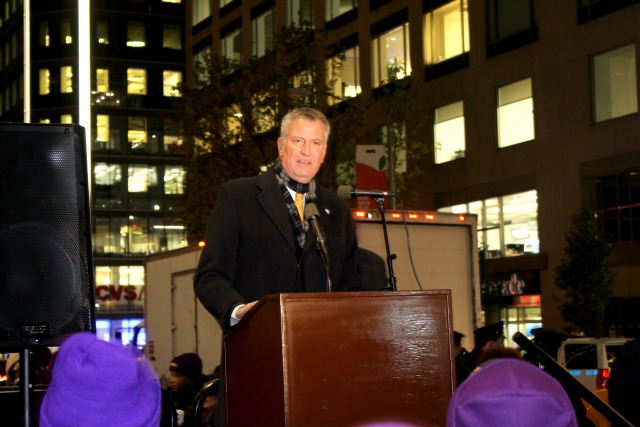 Carlos de Grijalva, who works at the 50th Street store, spoke about the economic struggles he has faced as the company cuts back benefits. "As time passed by, maybe four years, I started seeing that some of the benefits that I had were disappearing," he said. "I don't get paid for birthdays anymore, I stopped seeing wage increases."

Ashley Flower, a spokesperson for Rite Aid, challenged the union's claim that benefits have been cut or costs increased for employees. "Rite Aid has historically provided our associates with one of the best health care packages in retail and will continue to do so," she wrote in an email to Gothamist. "The union has failed to put any proposal on the negotiations table in over a year. We would welcome the opportunity to meet with the union and have a meaningful discussion; to date, the union has been unwilling to do so."

The protest comes as Walgreens is poised to acquire Rite Aid. If the $9.4 billion merger goes through, it would form the largest pharmacy chain in the world, with more than 10,000 locations nationwide.

"New York City became great because of union labor. And we feel solidarity with each other. So Rite Aid may have a problem on their hands if they don't treat the workers right," de Blasio said. "A whole lot of other workers may stop going to Rite Aid. You could lose a lot of customers that way."