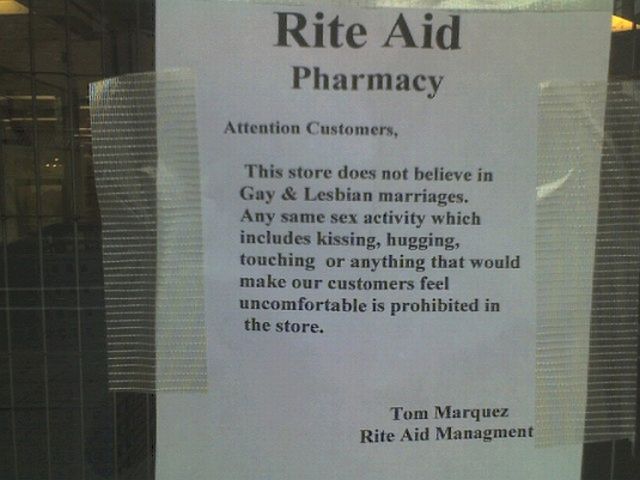 Queerty has it that a Rite-Aid on Sixth Avenue and 13th Street posted this anti-gay P.D.A. sign in their store over the weekend. If true, it doesn’t seem like the smartest way to win over the Greenwich Village/Chelsea clientele. But employee Kularee Kamhal, who worked there all weekend, swears “it’s a lie.” There is no manager or employee named Tom Marquez; according to her the store’s manager is one Jose Santos. Something doesn’t add up here; maybe this is all just a desperate attempt at sabotage from a rival Duane Reade?

In DC, a Rite-Aid manager reportedly ousted a hugging same-sex couple from a store; a hug-in was held a week later.

#anti gay
#gay
#homosexual
#kissing
#marriage
#PDA
#rite aid
Do you know the scoop? Comment below or Send us a Tip