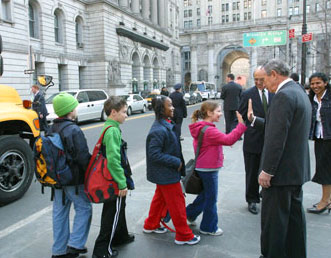 Back in March of 2003, Mayor Bloomberg opened up the City Hall Academy at the Tweed Courthouse. The school offered two-weeks "residencies" for students, giving them an "inter-disciplinary approach" to learn about NYC and its history. Mayor Bloomberg, who made education reform one of the cornerstone of his mayoral platform (it's a big part of his "national" persona, too!), had said, "The opening of City Hall Academy demonstrates our commitment to excellence, achievement, and innovation in the public school system. City Hall Academy will provide New York City children and their teachers a unique opportunity to study and participate in the cultural and historical fabric of the City.”

Today, the NY Times reports on City Hall Academy's closing without the same kind of pomp that greeted its opening. The school had been moved to Harlem last year ("to make room for a charter school run by a wealthy patron") and was closed this year because the Department of Education wanted to "spend money elsewhere." The charter school that now resides at the Tweed Courthouse is the Ross Global Charter Academy, founded by Courtney Sale Ross, which the city had wanted to move into an existing Lower East Side school.

That suggestion riled up the LES school's parents - as well as Assembly Speaker Sheldon Silver - and with Schools Chancellor Joel Klein supporting the charter school concept, Ross moved to the Tweed Courthouse and City Hall Academy was moved uptown. Which made learning about the founding of the city a little more difficult, since much of the curriculum relates to lower Manhattan sights, like New Amsterdam and, uh, City Hall.

One critic of Mayor Bloomberg, Sol Stern at the Manhattan Institute, told the Times, "It was just another little gimmick. There was no great need for this; it was one of those ideas that was another rollout and press release for them to prove that they are shaking things up.” The DOE's statement to the Times: "City Hall Academy was a valuable demonstration site for best practices from around the city."