Riled Up Over Rudy Reading of 9/11 Names 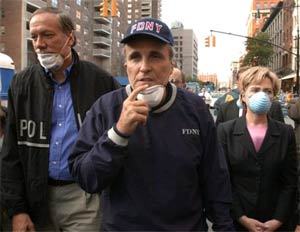 Just two weeks away, the sixth anniversary of September 11 continues to be a source of controversy. Before, it was families upset over the city and state's decision to hold the ceremony at a nearby park and not at Ground Zero (a compromise was later brokered to let families visit "the Pit"). Now, it's over Rudy Giuliani's role reading the names of victims.

In the past, Giuliani has participated in the event, which no one really blinked an eye at because he was a big part of September 11. But now, as a presidential candidate who discusses September 11 at all times and seems to exaggerate about his presence at Ground Zero, some wonder if this is too opportunistic.

Deputy fire chief Jim Riches, whose son died on September 11, told amNY, "I think it's a horrible decision and I'm outraged. Seventy percent of us are now sick because he lied about the air quality down at Ground Zero, and he was too busy raising money and going to the World Series to pay attention to what was happening down there. He should just go to a Yankees baseball game instead." And another fallen firefighter's parent, Sally Regenhard, "That this man, whose actions and inactions were so significant in the deaths of so many firefighters and innocent civilians, would be reading at this ceremony is insulting."

The AP points out that no declared presidential candidate has ever spoken at an anniversary event (the NY Times notes that Senator Hillary Clinton will be attending the ceremony, but will not speak, because speakers are now limited to "mayors of New York and governors of New York and New Jersey"). Giuliani's spokesman said, "If you know Rudy Giuliani, he'd be down there paying his respects whether he was invited or not. This is something that happened to him as a person, as a New Yorker, as a mayor, and as an American. To say he's politicizing it - he never would do anything like that."