A team of architects, academics, and advocates is proposing that the city build high-rise "community jails" in each of the boroughs, outfitted with amenities such as roof decks and caged-in patios.

The Justice In Design plan, released Thursday, calls on the city to "create healthy, normative environments and support rehabilitation for incarcerated or detained individuals, while simultaneously providing neighborhoods with new public amenities."

Ordered up by the city-sanctioned criminal justice commission that first outlined plans to close Rikers Island, the proposal lays out a drastic re-envisioning of what jails—also referred to in the report as "justice hubs"—look like. Instead of being cut off from the rest of the city by walls and distance, the report's authors call for Rikers's smaller replacements to be centrally located near courthouses, worked into high-rise buildings that house other public-service offices, and with access to light and outside air.

"Making [the jails] local is about making them accessible to the courts so there's faster due process, there's more accessibility for visitors to be able to see [inmates], access to legal services, and really starting to remove this idea of 'out of sight out of mind,'" said Jessica Lax, director of competitions for the nonprofit Van Alen Institute, which oversaw the drafting of the proposal. "These are people that are in there, aren't convicted of a crime yet—at least 75 percent of them—they're members of our community and we really need to start thinking of them that way."

The proposal envisions, among other things, outdoor areas with picnic tables and ping-pong tables for guards on break, fenced-in outdoor annexes for jail visiting areas, and two-story caged patios and roof decks for detainees. It also calls for guard retraining in terms sure to enrage Rudy Giuliani, with references to "trauma-informed and people-first language." 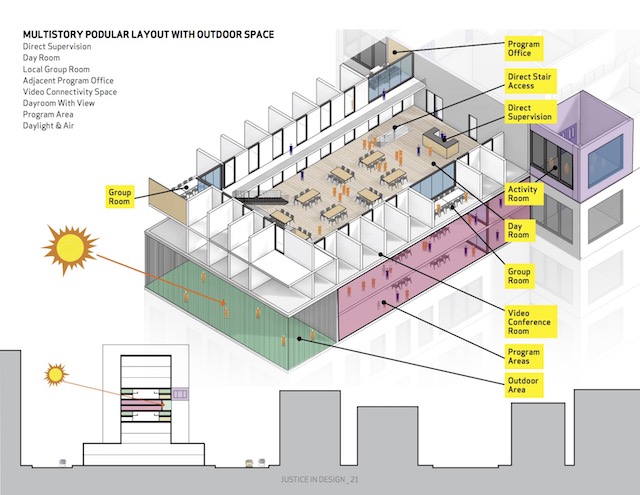 The 61-page document was generated following listening sessions with neighbors, formerly incarcerated people, and guards, according to the institute. The report contains just three variations of the word "security." Asked about the lack of emphasis on security in the jail plan, Lax said that the group has faith in the Department of Correction to ensure adequate security when the time to build draws nearer, but that it "would come into a later phase of design."

The architectural ideas are just "one element" of changes that need to be made to "a multi-faceted, incredibly complicated system," Lax said.

Correction Officers' Benevolent Association spokesman Michael Skelly said that the union wasn't consulted in the drafting of the document, and called it a "fantasy."

"The pictures in that design presentation look like kids starting a startup company," he said. "This is the second largest correction system in the country. This is a very serious notion about what we're going to do with the future of nine jails on Rikers, thousands of inmates, thousands of correction officers, and all the other civilians who operate the bakery on Rikers, the programs on Rikers. And it's just basically ignoring those things and coming up with a fantasy put together by a bunch of kids looking to do the next startup."

Skelly pointed to the proposed correction officer break room for example. He said that the city's jails are woefully short-staffed—the Department of Correction has been logging tens of millions in un-budgeted overtime for over a decade—and the break area would be no help to anyone.

"Unfortunately these very nice designs and relaxation rooms are all well and good—they would collect a lot of dust," he said, "because unfortunately the reality is correction officers are too busy and too stretched thin to ever have a moment off to enjoy them."

The series of proposals generated around closing Rikers this year are a distraction from Mayor de Blasio's 2015 plan to reduce violence at the jail facility, according to Skelly. The plan has failed, as fights, slashings, and stabbings increased by about 20 percent in fiscal year 2016, according to WNYC.

"Wouldn't it be great if we had workshops and presentations and proposals and plans to address the issues that could really save lives as opposed to another fantasy novel?" Skelly said. 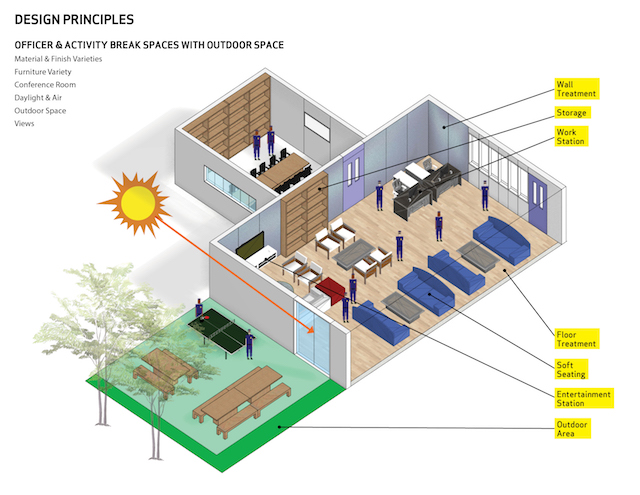 Ping pong is on offer for jail guards in the community jails envisioned by the report's authors. (Van Alen Institute)

Mayor's Office spokeswoman Olivia Lapeyrolerie declined to address the criticism, but wrote in a statement, "We appreciate the work of Van Alen to re-imagine jails and will review the report. The Rikers Implementation [T]ask [F]orce subcommittee focused on safe and humane jail design will take the findings of this report into consideration as we advance the Mayor's Plan to close Rikers Island.”

Mayor de Blasio has endorsed many of the aspects of closing Rikers over the next decade, an idea first put forward by Council Speaker Melissa Mark-Viverito and the commission she put together, but has stopped short of explicitly endorsing their initial call for small jails in each of the five boroughs. Building those jails is likely to be a heavy political lift, pitting the city against NIMBY activists and local politicians reluctant to cross them. It is also contingent on a mayor or mayors after de Blasio wanting to continue to pursue the goal of closing Rikers, as well as an array of reforms to continue to reduce the jail population, and a continuing decline in the crime rate.

The architectural proposal makes the five-borough goal slightly more explicit by saying that the new community jails should be "adjacent to or combined with courthouses," placing them roughly in or near Downtown Brooklyn, lower Manhattan, Kew Gardens, St. George, and the area around Yankee Stadium.

Lax said that going into a workshop with Downtown Brooklyn residents, organizers expected to hear NIMBYism about the House of Detention there, but found none.

"We thought there would be a lot of people who hated it," she said. "A lot of people didn't even know it was there. Their main concern was that officers parked on the sidewalk. No one said worried about safety [in relation to the jail], which was interesting to hear and surprised us. But parking we can design for."

The plan calls for new jails to include dedicated parking for visitors and staff.

The New York City correctional facility closest in design to the proposal is the Metropolitan Correctional Center, a 12-story federal jail in a warren of government structures behind the Municipal Building in lower Manhattan. The vertically stacked jail has an outdoor recreation area on its roof, but it lacks the rooftop greenery envisioned by the justice hub designers. The designers' renderings, on the other hand, don't have the overhead fencing of MCC. The downtown jail's wire roof thwarted a drug dealer's attempted helicopter escape in 1981.