At a City Council hearing earlier today, Department of Correction Commissioner Joseph Ponte was asked to account for the conditions of the roughly 250 inmates in his custody under the age of 18 who live within a "deep-seated culture of violence," where guards use force against nearly 50% of the population with impunity, according to a DOJ report released in August. "There's nothing in that report I disagree with," Ponte testified.

Ponte was appointed in March by Mayor de Blasio with 40 years of corrections experience and a reputation as a reformer. He entered his job as reports of inmate deaths and the brutality and incompetence of certain Correction officers became near-weekly occurrences.

In August, Gothamist published a report on the teenagers who are thrown in solitary confinement on Rikers Island and spend 23 hours in a cell, suicidal and all but abandoned by the state. Earlier this month The New Yorker wrote about Kalief Browder, a 16-year-old who spent three years on Rikers Island on a bogus robbery charge, and served nearly 800 days in solitary confinement, where he too tried to kill himself.

"Officials on Rikers subjected this child to torture. There's no other way to put it," Councilmember Daniel Dromm told Ponte at today's hearing. "I am disgusted by what happened to Kalief."

Ponte, who speaks in a thick Boston accent, testified that "life [on Rikers] for 16 and 17-year-olds is different today than it was six months ago," and noted that use of force against minors under the age of 18 dropped from 30 to 40 incidents per month last year to 19 for the past two month of 2014, in large part because 18-year-olds were removed from the juvenile detention facility.

While noting that Correction officers had the right to "protect themselves and keep themselves safe," Ponte vowed to punish those who abused their authority.

"Any case of excessive force needs to warrant the most severe discipline," he said. 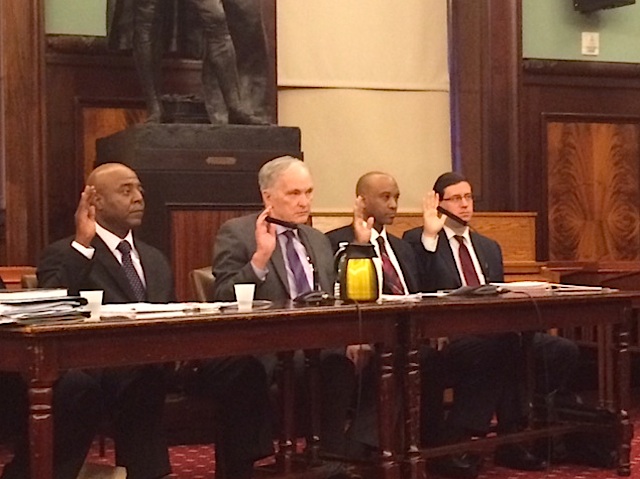 "When somebody splashes an officer, does that justify use of force?" asked Councilmember Elizabeth Crowley, the chair of the Fire and Criminal Justice Services Committee, referring to incidents when inmates throw urine or feces onto jail staff.

"If the inmates are in a contained place, like their cell, there is no need for use of force," he replied.

Ponte also promised at least 400 more surveillance cameras to cover areas where Correction officers might be tempted to abuse inmates, repeated his promise to phase out solitary confinement for all juveniles by 2015, and said he personally supported legislation that would give 16 and 17-year-olds juvenile status under the law. Currently, North Carolina is the only other state in the union to imprison 16-year-olds as adults.

Ponte also said he was looking for a place to move juveniles off of Rikers Island, a decision that de Blasio opposed in August even though it was recommended by the Department of Justice in their report. "We'd be in favor of that if we find a suitable site," Ponte said. "We will continue to explore other buildings…we're actively doing that."

Though he testified that he was working closely with the Department of Justice to draw up a settlement agreement to ensure that the civil rights of juvenile detainees on Rikers Island would no longer be violated, Councilmember Crowley and Speaker Melissa Mark-Viverito continued to question Ponte's commitment to changing the culture in the jail.

Last month the Times reported that two Correction officials, William Clemons and Turhan Gumusdere, were both promoted by Ponte in May, despite evidence of a draft of a 2012 internal audit showing that they both committed a "complete abdication" of their duties, and doctored reports of violence in the jail. The Department of Investigation also recommended that the two be demoted.

"In the attempts to really turn this agency around to make the changes, the systemic changes that really need to be made, do you really think it was appropriate to not only keep these individuals on board, but to promote them?" an incredulous Speaker Mark-Viverito asked.

"Yes," Ponte replied, explaining that the men were experienced and had done good work, to his knowledge.

"The report that I reviewed when I promoted them was not the report you're reading from," Ponte replied, without admitting that the report itself was found to be inaccurate.

Clemons is now Deputy Chief, the highest ranking uniformed officer in the department, so why wasn't he at today's hearing?

According to Ponte, "He's on a long-planned vacation."

#correction department
#doc
#Joseph Ponte
#Rikers Island
#original
Do you know the scoop? Comment below or Send us a Tip