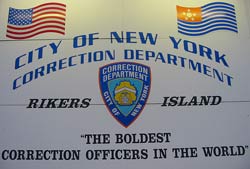 A Rikers Island corrections officer is being investigated for possibly helping an accused cop killer try to escape from custody. The unidentified guard may have passed a handcuff key to Lee Woods, one of the men accused of gunning down Officer Russel Timoshenko a year ago during a traffic stop. The key was discovered in Woods' digestive tract when he was passed through a metal detector at the jail.

Two other guards have been fired for allegedly supplying Woods with drugs and alcohol while he's been jailed at Rikers. Woods told the Daily News that he was set up for possession of marijuana in his cell by one of the guards. Despite his claims of harassment, Woods has been racking up extra time for bad behavior at the jail, including assaulting guards, arson, and possession of a homemade weapon.

Woods was one of three men in a stolen BMW pulled over by Officer Timoshenko in 2007. As he approached the vehicle with his partner, Timoshenko was shot twice in the face and died of his injuries a few days later. His partner was struck once in his bulletproof vest. Woods maintains that he was only the driver of the BMW and this his two cohorts did the shooting.