A crew of right-wing skinheads allegedly attacked two brothers at a bar on the Lower East Side early on Saturday morning over an antifascist sticker on one of the men's cellphone cases.

The toughs reportedly zeroed in on the two men, Columbia University graduate students, as they exited Clockwork on Essex Street at around 12:30 a.m., after one of the skinheads noticed a sticker on one of their phones for the group NYC Antifa, the loosely knit network of activists who monitor far-right and neo-Nazi activity and occasionally rumble with those who they deem fascists.

Police told the tabloid that six or seven goons, some wielding brass knuckles, took part in the beat-down, all wearing matching vests with patches that read "211 Crew." The brothers tried to run away, but the skinheads caught up to them on Hester Street and whaled on them some more, an NYPD official told the paper. One of the skins pulled out a knife and tried slashing one of the victims before the group finally took off, according to the Post's anonymous victim.

Officers in an unmarked car spotted the bloodied brothers on the sidewalk as they tried to call 911, and the victims pointed out one of their alleged attackers standing nearby, police confirmed to Gothamist. Police arrested John Young, 29, of Washington, D.C., and charged him with assault, menacing, criminal mischief, and weapon possession. Young has not yet been arraigned.

Both men were reportedly hospitalized and required staples to close head wounds they suffered in the attack.

The 211 Crew/211 Bootboys are a New York City and D.C.-area skinhead group. Rather than explicitly espousing Nazi or white supremacist ideology, bands that perform as part of the crew's oi punk scene emphasize ultra-nationalism and Islamophobia in their rhetoric and the lyrics, meaning white skinheads slam-dance alongside minorities who support some form of nationalism while also sometimes associating with outright neo-Nazis. Members organize the annual Oi! Fest in New York, which last year was forced to move venues after one night due to outrage about its content. Video of the event showed attendees openly making Nazi salutes despite what appeared to be organizer Dennis Davila's pre-show exhortations for fans to tone down the Nazi stuff. 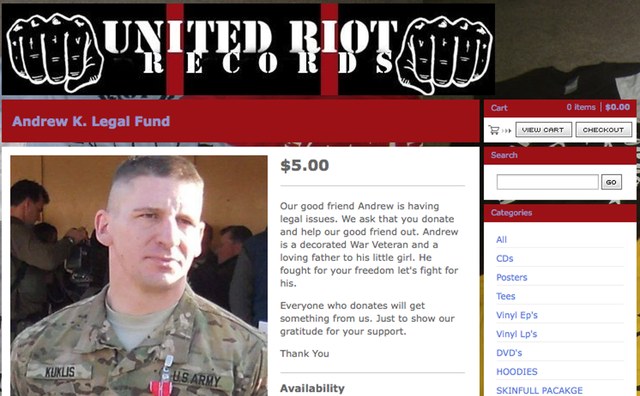 On Saturday night, right-wing skinhead bands performed in Brooklyn to raise money for the legal defense of Andrew Kuklis, a 41-year-old man from Patchogue who was arrested in Suffolk County after police allegedly found him in possession of three handguns, an AR-15, and a dagger, as well as some marijuana. A recent post on the website of Davila's United Riot Records seeks funds for "our good friend Andrew" who the page says "is having legal issues."

United Riot Records did not immediately respond to an email seeking comment.

The New York 211 Crew does not seem to be affiliated with the white supremacist prison gang by the same name. Founded in a Colorado prison in the mid-1990s, the gang now has a presence in the streets and in several states. A mistakenly paroled member, Evan Ebel, killed Colorado prison chief Tom Clements in 2013, then fled to Texas where he died in a shootout with police. In Ebel's car investigators found pipe bombs, bomb-making materials, directions to Clements's home, and a hit list with the names and addresses of other Colorado officials.

In an interview with the skinhead zine Backstreet Battalion, United Riot Records founder "Dennis Riot" said, "211 crew started in 1999 just a group of Skins [sic] who didn't give a fuck and hated commie scum like rash [Red and Anarchist Skinheads, a left-wing skinhead group]. There's [sic] members in most of the Oi! bands from NYC."

In 2009, a Department of Homeland Security study on right-wing extremism written with the FBI concluded that "lone wolves and small terrorist cells embracing violent right-wing extremist ideology are the most dangerous domestic terrorism threat in the United States." The agency retracted the report after outcry from Republicans.

Clockwork sent a statement saying, "Our hearts go out to" the victims, and that the owners "pray for a speedy recovery."

We would also like to state clearly that Clockwork Bar does NOT endorse, sympathize nor invite the views and beliefs of neo nazi, [sic] supremacist hate groups. These groups and their views are NOT welcome at our establishment. They have never been, nor will ever be [sic] invited or allowed in our bar. We apologize for what happened and are taking steps to prevent future instances as well as working with the NYPD to increase awareness and security for our patrons.

Furthermore, it is fundamental to Clockwork Bar, its ownership and Staff, that we are NOT a neo nazi, [sic] white supremacist or any hate group association establishment. Clockwork is about music, friendship and good times, anything else is hereby prohibited.

It turns out that Matt Restuccia, lead singer of the right-wing oi band Lonewolf and a 211 member, was DJing an after-party at Clockwork on the night of the attack. A flyer for the DJ set advertises it as an after-party for a concert by the legendary English punk band Cock Sparrer. Restuccia was singled out in a 2014 blog post by NYC Antifa for a photograph of him wearing a shirt of the white-power band Skullhead, posing in a group with an alleged neo-Nazi.

On Restuccia's Facebook page yesterday evening, a friend wrote, "[W]hat's with 211 going to bars where their friends work and starting a bunch of shit?"

"I've only been fired once haha [sic]," Restuccia replied.

The page has since been made private. The owner of Clockwork, Frank Scotto, said that Restuccia had worked there as a bartender in the past few years—"I don't know how many shifts, but I could count them on one hand"—and that his contact since had been limited to occasional DJ gigs. Now, Scotto said, he's banned.

"We’ve already banned Matt from coming here and his friends, and obviously with our statement, anyone else that’s a hate group or a neo-Nazi," he said, adding, "It's my fault that I didn’t know that he was aligned with these guys. All staff know he’s not welcome here, nor are his friends."

Further down in the Facebook thread, another friend asked Restuccia, "Lay it down here Matt, what really happened?"

Restuccia responded, "1: There was no knife. 2: There were no brass knuckles. 3: It was not a 7 on 2 situation or whatever the Post reported. As for what started the whole thing, I was inside djing so have no idea. At the end of the day it's an unsubstantiated, one sided report of something minor, being made out to be something far bigger than it is."

Police said the shootout began when officers responded to a report of a stolen car in the Bronx.