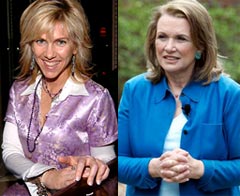 Newsweek reporter Jonathan Darman has a "First Person" article, What Rielle Hunter Told Me, based on his interactions with "campaign filmmaker"-John Edwards's mistress before it was known she was John Edwards's mistress. Darman saw her on a commuter flight, as he followed the Edwards campaign back in July 2006, "I had no reason to suspect there was anything between them."

Hunter is portrayed as a New Age-y type, asking Darman what his astrological sign is and saying Edwards could be a "transformational leader" like Gandhi and Martin Luther King if he tapped into his heart more. The choice tidbit that the tabloids jumped on was how, during a lunch at the Aquagrill in Soho, Hunter says about Elizabeth Edwards, "I've only met her once. She does not give off good energy. She didn't make eye contact with me."
And when she was finally fired by the Edwards campaign, Hunter implied Elizabeth Edwards was behind it, "Someday, the truth about her is going to come out."

The LA Times looks more closely at the webisodes Hunter produced for the campaign, Gawker notices the creepy moments in one video in particular, Slate looks at how the Edwards affair can recall John McCain's first marriage. Oh, and Hillary Clinton supporters, chew on this: Her former communications director Howard Wolfson thinks she would have won Iowa--and been the presidential nominee--if the Edwards thing had been revealed way back when.

#elizabeth edwards
#john edwards
#newsweek
#rielle hunter
Do you know the scoop? Comment below or Send us a Tip