Rides Go Up for Sale as Astroland Closes Shop Today 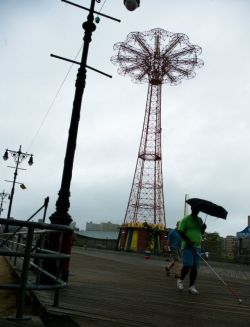 Today will be the last ride for Coney Island's Astroland. That will leave park owner Carol Albert with two dozen rides and 16 trailers worth of items accumulated over 46 years to clear out by next January in order to avoid fines from land owners Thor Equities. In order to clear out ASAP, Albert has already put several of the rides up for sale online from a firm called "Rides-4-U." Rides such as Dante's Inferno and Top Spin can be bought for prices ranging from $200k-$500k.

Albert says that she has offered the Astro Tower to both the city and the New York Aquarium so that it could remain on the boardwalk, but that there hasn't been any interest from either. "I probably waited too long, but I was really hoping we could get a deal done," she told the NY Post. Gowanus Lounge first caught the rides being listed for sale and says that many old rides from American parks often end up in carnivals or amusement parks in Latin America and Asia.

Meanwhile, the group Save Coney Island will be fighting back tears and out in full force passing out flyers on the last day of their beloved amusement park. Even with Astroland gone, the group hopes to preserve Coney Island for amusements instead of Thor's plans to transform the area for residential, hotel and retail uses.