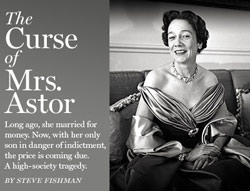 New York magazine has an extraordinary cover story on the life of Brooke Astor, months after the "doyenne" of the city's social scene passed away. It is a sordid tale of jealousy, greed, enmity, conflicting agendas, and familial conflict worthy of the most outlandish soap opera. Her son Tony is now under i investigation by a grand jury and control of her estate has passed to Astor's friend Annette de la Renta. The litany of shabby behavior runs the gamut.

The feature will leave readers with a mixture of schadenfreude and sadness, contemplating privileged lives of wealth spent poorly--in the sense that almost everyone involved is embittered in the end. We imagine film treatments are already being drawn up, as Brooke Astor's life seems predestined for a screen as large as the city she lived in and endowed, personally and financially.