Rich people are like delicate tropical fish, the canard goes. Asking them to give an extra latté a day to maintain the tank shatters their pH equilibrium like a toddler's grubby playground fist. Sorry to tart up your coral reef with some ceramic skulls, but this theory that higher taxes means a liquidation of the tax base is a lie, and a new report [PDF] from the city's Independent Budget Office confirms it.

The IBO report examines the New Yorkers who left the city in 2008 and 2012, and found that in the latter year, nearly 42% of households making more than $500K/year moved somewhere else in New York. New Jersey, the state that has one of the highest tax burdens in the country, was their second choice, with 22% of high income households moving there in 2012.

"High-income New Yorkers were no more or less likely to move than other households in 2012," the report states. "The share of high-income households that moved, 1.8 percent, was just equal to the share of city households with high incomes."

Connecticut was the third most popular destination for the rich, which is fine. Don't let the Darien hit your Fairfield on the way out. 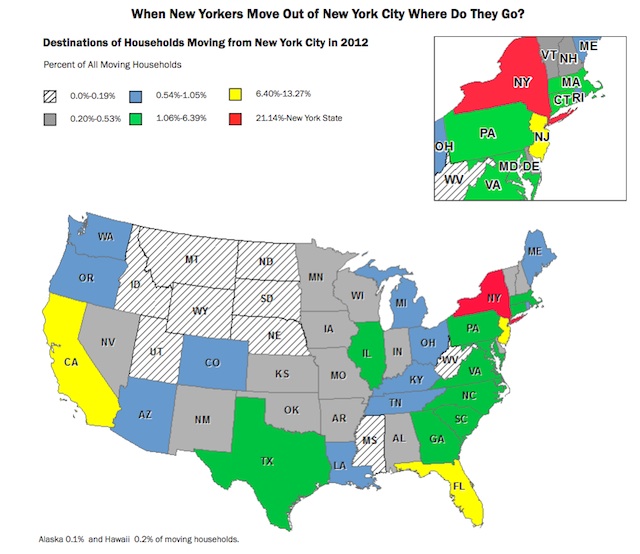 Florida, the state where proud lizards go to dodge sinkholes and sun themselves on over-leveraged rocks, was the third most popular destination of all households, regardless of income.

"Given the state’s popularity among retirees, it is perhaps unsurprising that the share of high-income households relocating to Florida was relatively small—just 2 percent of those who moved in 2012," the report states.

So remember: wealthy people don't flee their homes because of higher taxes. Corporations do.