Revisiting the Murders of 1963 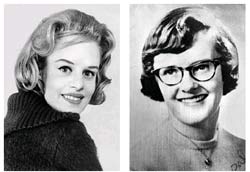 The city has been crowing about this year's low murder rate since last week, when officials announced it was likely to be under 500 murders. Currently, the murder rate is 492 as of Sunday night (we're not sure if that number includes the three men killed in Brooklyn); this year's murder rate would be the lowest since 1963, the first year with reliable data and a year that saw 548 killings.

The NY Times examines the low murder rate and flashes back to 1963. Back in 1963, most crimes were committed with knives, the Mafia was involved in some of the killings, and most of the murders were in Manhattan (237). These days, Manhattan had less than 70 (Brooklyn led with over 200), which a law enforcement historian chalks up to "more than a decade of rigorous enforcement by the police and prosecutors, and to demographic changes that have brought fresh investment and stability to some neighborhoods."

While the Mafia was involved in some of the 1963 murders, the headline grabbing crime of the year was the murder of two twenty-something women in their Upper East Side apartment. Dubbed "The Career Girls Killings," George Whitmore, a 19-year-old black man was arrested, but another man, Richard Robles, was eventually arrested and confessed. The mistaken arrest of Whitmore led to NY State's abolition of the death penalty; Whitmore's arrest and forced confession was also referred to in the Supreme Court's ruling that led to Miranda rights.

For crime history buffs, here's the Crime Library entry on the Career Girl Killings and there's this article by Marvin Smilon, who covered crime for the NY Post in 1963; the article describes the investigations, the arrest of Whitmore (in spite of lack of evidence) and the eventual conviction of Robles and freeing of Whitmore. Selwyn Raab, who had been working for the New York World-Telegram and Sun, also wrote a book, Justice in the Back Room, about the case.