Photo of Rev. Billy's announcing his campaign via randomdeanna's flickr.

Watch out Bloomberg! Yesterday Reverend Billy launched his campaign for Mayor of New York City, sending out a letter declaring "It's time for all of us to rise up and reclaim our wonderful city from Starbucks and the other awful chain stores, from real estate speculators and the predators on Wall Street. Together, we'll give New York back to the people who love it." Hallelujah! Nominated by the Green Party last week, he made his announcement in-person in Union Square yesterday, donning an electric blue suit. This campaign needs a Shepard Fairey portrait, stat.

The Rev's press officer, Michael O'Neil, told the NY Times, “We’re at a critical point in the city’s history right now. The mayor’s trying to privatize Union Square. We’re surrounded by logos everywhere. We need to oppose that.” So you can bet that a vote for Billy is a vote to keep Wal-Mart out of New York. Read the Rev's full letter after the jump, you can also follow him on Twitter. 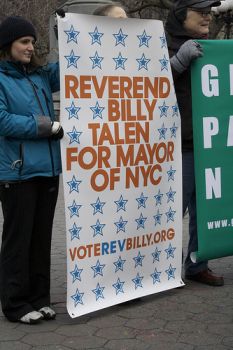 Today I am launching a campaign for Mayor of New York City. Our campaign will be devoted to nourishing and strengthening our common wealth, our city's heritage, our lovely parks, roads, streets, neighborhoods, and the people who live in them. This city once belonged to us, and it will once again.

It's time for all of us to rise up and reclaim our wonderful city from Starbucks and the other awful chain stores, from real estate speculators and the predators on Wall Street. Together, we'll give New York back to the people who love it.

I believe that the current mayor considers New York City a corporation. This is a natural tendency for a Wall Street guy. Parks, libraries and schools, for instance, are viewed as not worthy of public support -- they must be privatized to pay their own way. This creates a snowball effect, in which our public commons is sold off to the highest bidder. The roadways are a disaster, certainly this is true in the neglected boroughs, but roads are a burden to this mayor, not an asset, and so they are ignored.

Frivolous but money-making arrests, parking tickets, park rentals, and development corporation scams like the take-over of Carnegie Hall Towers (and eviction of 85 year old artists) and the cutting down of old trees in Union Square by mysterious semi-public agencies... not to mention the Olympics, Yankee Stadium and Atlantic Yards boondoggles engineered by wealthy associates -- these are the kind of distortions that come from the corporatizing of civic life.

It can't surprise us that Bloomy never met a developer he didn't like, but we might object once we've dodged a falling crane, or watched yet another neighborhood crushed under the weight of subsidized chain stores and rent hikes. This mayor has continued the attack on neighborhoods pursued by Giuliani. The 500 neighborhoods of New York, if they are healthy, are protecting our families and jobs. Local economies anchored by independent shops and public spaces are not as sexy to this administration as luxury boxes, corporate jets and the like, but really the greatness of this city is in its neighborhoods.

As mayor I would re-establish the importance of the things we hold in common trust. And there is a living relationship between our green spaces in the city and the changing earth that threatens from the horizons.

#Billy Talen
#Green Party
#mayor
#reverend billy
Do you know the scoop? Comment below or Send us a Tip