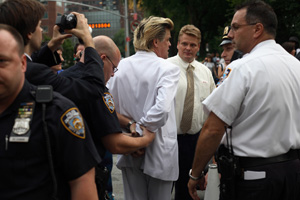 Reverend Billy was arrested and detained last night while reciting the First Amendment in Union Square. The police claimed his preaching it at this month's Critical Mass constituted "Harassment of a Public Official". The NYPD has a history of some controversial arrests at the Critical Mass events, and at last night's the number of police practically outnumbered the riders. From the press release we received:

"...even unaffiliated riders were ticketed as they approached the park. Reverend Billy and his partner Savitri D were reciting the First Amendment to the United States Constitution to the gathered police force when Lieutenant Daniel Albano, head of the NYPD's Legal Division, ordered the Reverend's arrest and detention at the 13th Precinct station. It is believed Albano is the public official Reverend Billy has been charged with harassing."

This brings up ongoing concern over protecting civil liberties and rights to free assembly and political action. However, it also draws attention to selectively enforced Parade Laws, drafted by the police and passed into law by the City Council earlier this year. The law criminalizes gatherings of more than 50 people that do not have permits. Something the press release points out is that "while the NYPD surrounded and intimidated last night's Critical Mass cyclists, a line of several hundred shoppers formed just across the street to purchase the new iPhone, blocking pedestrian traffic and forcing people to walk in the street."

As of now, Reverend Billy is being held at 100 Centre Street, awaiting arraignment. Hopefully he'll be out for tomorrow's Hot and Holy Highline Revival show!