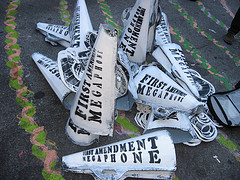 You may recall that Reverend Billy Talen was arrested in June for reciting the First Amendment in Union Square during a Critical Mass night protesting the proposed photography laws. We posted video of the arrest at the time, and Talen spent 20 hours in the Tombs charged with two counts of second-degree harassment.

Yesterday the Rev faced the judge and The NY Times reports that in court "the prosecutor told Judge Tanya Kennedy that Mr. Talen’s offense had been to shout the familiar lines beginning with 'Congress shall make no law' while standing just three feet from the officers, and to ignore their requests to stop. The prosecutor, Mary Weisgerber, said his behavior was 'obnoxious' by any standard."

Talen defended himself with the aforementioned video, saying he was 15 feet away from the officers. Meanwhile his lawyers defended him saying harassment is defined as not having a legitimate purpose -- but reciting the First Amendment at a rally is quite legit. By the end of the day the district attorney’s office was given until October 15th to respond, and a new court date is set for November 14th. If sentenced Reverend Billy could end up with 15 days in jail.