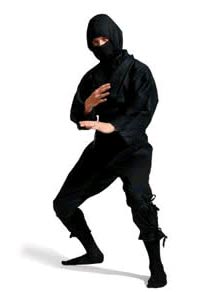 A Todt Hill couple's home was broken into by the infamous Ninja Burglar last night. The craziest part: The wife ran into him. The Staten Island Advance reports that Mary Ann Carlo bumped into the intruder. Carlo said, "I started screaming, 'The Ninja is here! The Ninja! The Ninja!'" The Advance has the details AND gets a plug:

At about 10:30 p.m., Mrs. Carlo turned off the television and headed downstairs toward the bedroom, where her husband was already asleep.

That's when she encountered a white male of medium build, clad all in black.

"I knew it was the Ninja Burglar from reading the Advance and not my husband playing some trick," she said.

The masked man didn't say a word when she happened upon him, and he didn't seem to be armed, she said. The two stood nose to nose for a brief moment, before she yelled and he took off.

She and her husband called 911 and left the house. Soon after, the cops "locked down" the neighborhood and used a helicopter to attempt to find the burglar but were unsuccessful. The Ninja Burglar has robbed at least 14 other homes. Two weeks ago, one homeowner stabbed the intruder but he still got away.

In the bedroom, Carlo found some of her jewelry on her jewelry box (the Ninja was in the room while her husband was sleeping!) and police say some of the missing jewelry was found in the driveway. The NYPD, which formed a "Ninja Burglar" task force," says that the crime "definitely" fit the Ninja Burglar pattern. All told, homeowners have seen him in six of the robberies.

And what's more, it's believed that he robbed a home in Oakwood after the attempt on the Carlos' house.