According to the criminal complaint, Rizzi, who left the NYPD in 2000, formed a company called BJM/Manhattan Stakes and Entertainment, located on Staten Island. From the press release:

The investigation into the company’s financial records revealed that several of BJM’s customers each spent more than $100,000 for the company’s services, and that some clients paid more than $25,000 for a single night. Over the course of its operations, BJM collected millions of dollars of payments, including more than $2 million in credit card payments alone between October 2012 and March 2016. A review of various personal and business bank accounts maintained by Rizzi revealed that they were used to promote the prostitution business by laundering almost $200,000 disbursed via Paychex for BJM employee salaries, $25,000 to tollforwarding.com for forwarding phone numbers listed on various of Rizzi’s websites to his phone bookers, $10,000 to GoDaddy.com through which Rizzi registered over 80 websites pertaining to his prostitution business, and $112,000 to Electronic Merchant Services for processing the more than $2 million customer credit card transactions referred to above. 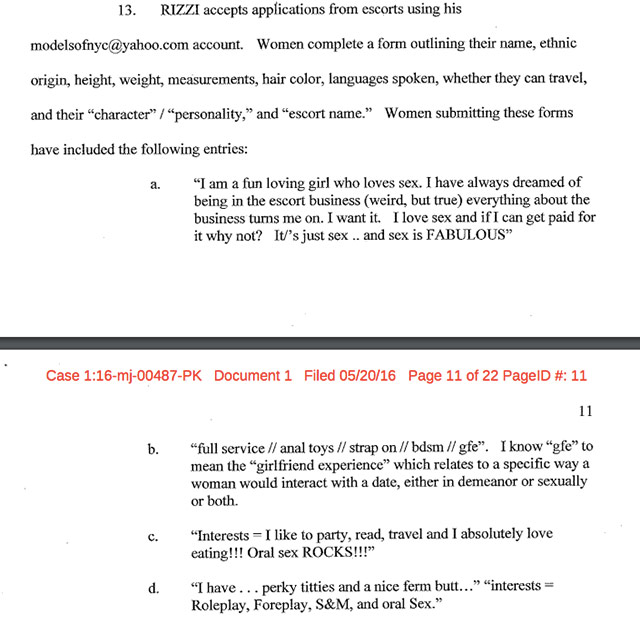 From the U.S. Attorney's criminal complaint

He also demanded to meet potential escorts in person, explaining, "My girls make the most money, my clients are the wealthiest people in the world. I will never send a model I haven't interviewed to them … been doing this 10 years never a problem."

A client told an NYPD detective that he and two friends paid $25,000 for three escorts to have sex and cocaine (which the escorts provided).

DNAinfo reports that a source says "Rizzi is married to Jill Juliano, the daughter of Gambino crime family member Richard Juliano, whose older brother is Joseph (Sonny) Juliano, a powerful Brooklyn-based captain in that Mafia family."

U.S. Attorney Robert Capers said, "The investigation and prosecution of money laundering offenses is a priority program of this Office. With this arrest, we continue to unmask organizations that launder millions of dollars through alleged criminal networks." And Commissioner Bill Bratton said, "The anonymity of the internet stretches only so far. Today, Michael Rizzi’s alleged scheme of prostitution and money laundering is up."

#escorts
#michael Rizzi
#money laundering
#prostitution ring
#staten island
Do you know the scoop? Comment below or Send us a Tip