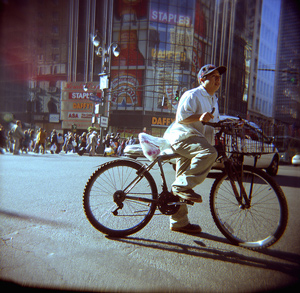 City Council members Jessica Lappin and Alan Gerson have introduced a bill that would pass tickets received by food deliverycyclists and bike messengers on to their employers. The fines, which range from $100 to $300, are supposed to encourage restaurants and delivery firms to firmly encourage employees to cycle safely in the city, aside from being killed themselves.

Council member Lappin says that reckless riders received 1,800 citations in her Upper East Side district alone this year and claims she received a note from a 9-year-old constituent who says she was nervous walking in the neighborhood because of sidewalk cyclists.

Gerson was a backer of a bill passed this spring that forced restaurants to make sure riders were wearing bike helmets, rules for cycling safety were posted in multiple languages that could be understood by employees, and paid a minimum wage. In March, delivery workers at Manhattan's Saigon Grill went on strike, alleging that owners wanted them sign a contract that would have them work for below minimum wage.