Residents of Carnegie Artist Studios Take It to City Hall 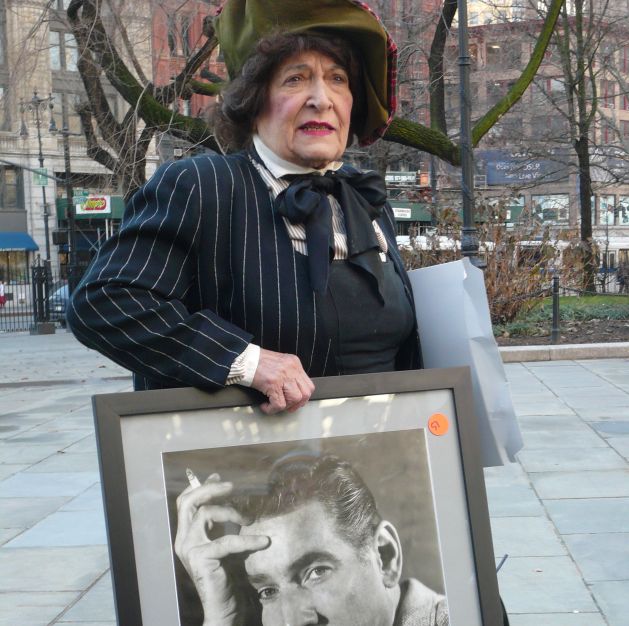 Actor/director John Turturro was among the protesters assembled at City Hall today for a rally to save the Carnegie artist studios, which could soon be taken over by Carnegie Hall expansion plans. But the big star of the day was 95-year-old Editta Sherman, the building’s longest living tenant, having resided there since 1949. She’s seen here holding a photograph she took of Leonard Bernstein, a former resident; Sherman’s studio in the building was once a destination for celebrities seeking classy photographic portraiture. Though her future there is now in jeopardy, Sherman, known to friends as the Duchess of Carnegie Hall, sounded resilient: “I’m not thinking about it, I’m not worried about it, because I’m not going anywhere.” 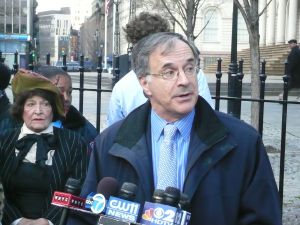 The studios, located above Carnegie Hall, have long been coveted by scores of artists who treasure the double-high ceilings and abundant northern light. The Carnegie Corporation, which manages the concert hall and the studios, plans to convert the studios to spaces for music education. Seven elderly tenants, including Editta Sherman, have rent-controlled apartments; the Carnegie Corporation has offered to help them relocate to comparable housing and subsidize their new rent for the rest of their lives. Asked about the other 40-plus tenants at a press conference following the rally, Carnegie’s executive director Clive Gillinson (pictured) said:

It’s going to be tough for them but almost all of them have come to the end of their leases. They can do their work somewhere else; the work of Carnegie Hall is the work of music and our contribution to the city has to come from Carnegie Hall. It’s not about us not caring, we do care. But musicians are artists and we feel we can make a big contribution to music education.

Janice Orlandi, a spokesperson for the tenants’ group, stressed that “even though some of the artists’ leases are technically commercial leases, it is their home and they’re people who have spent their lives living and creating in those spaces and the studios are more dear to them, in many cases, than their homes.” The purpose of the rally was to deliver a letter of appeal to Mayor Bloomberg, which was signed by a large group of artists and celebrities including Robert De Niro, Brian Cox, Steve Buscemi, Tony Kushner and Joel Coen. An online petition is here.