Residents of 475 Kent Fight to Return 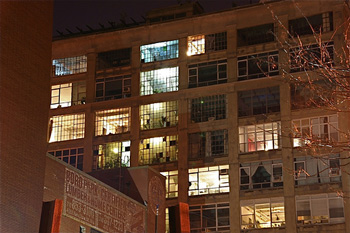 A piece in The New York Times today shows that that the residents of 475 Kent are not prepared to go quietly after their recent eviction due to fire safety violations. Even the landlord of the owner of the nearly block-long building near the Navy Yard in Brooklyn wants his tenants back in and is cooperating with them to that end.

The City and the Fire Dept. so far have been unyielding. At issue, they say is the ultimate safety of residents and firefighters in the wake of the Deutsche Bank building fire last year. Following that fire, which killed two firemen, safety inspections were stepped up and numerous violations were found at 475 Kent

Displaced residents have been granted limited access to the building to remedy violations. The standpipe has been fixed, flammable materials have been removed from the basement, and residents have found architectural experts willing to vouch for the building's current safety. But the sprinkler system needs to be replaced and that could take three months. The Fire Dept. is insisting that residents may not return to 475 Kent until the entire system has been replaced.

The problem with that is many of the people who lived in the building also established businesses there, cottage industries that included things like huge molds, sculptures, and printing presses. Artist Eve Sussman sent a letter to Mayor Bloomberg Friday that can be read after the jump.

Dear Mayor Bloomberg, The situation for the 200+ tenants of 475 Kent Avenue has become desperate as our livelihoods and businesses are increasingly threatened. Everyday that our work places are shuttered we miss a deadline, lose a client or a contract and fail to make a sale of the goods and services that support our lives. As the vacate enacted by the FDNY on January 20th drags on, many of us risk bankruptcy and the complete destruction of the businesses and careers we have spent the last decade building at 475 Kent Ave.

Whether or not the state of 475 Kent posed immanent threat to human life on the night of January 20th, 2008, it certainly does not today. In fact, our building is safer than most factory buildings in the city. It is of solid fireproof construction, has two means of egress, has working standpipes and Siamese connections, emergency exit lights, fire extinguishers and smoke detectors.

The architectural plans for the building are being filed with the DOB today and the work to rehabilitate the sprinkler system will be underway by next week. We need access to our studios NOW. Upholding the vacate order is unreasonable and is now truly endangering our lives as many of the tenants face financial ruin. What we are headed for now is a real emergency. We have had architectural and fire-safety experts survey our building and they have deemed that it is safe for inhabitants and for fire fighters. Fire Guards are often employed in buildings where sprinkler systems are not in place or are being repaired. We have had Fire-Safety companies report to us that Fire Guards have been used in buildings without working sprinkler systems for up to two years. In case it wasn’t clear, our building is constructed of one-foot thick cast concrete, a non-combustible material.

It is absolutely untenable for us to wait for the completion of work on the sprinkler system to gain access to our studios. Even if this work could be expedited in 3 – 4 weeks (and most estimates put it at 2 – 3 months) we cannot afford to be out of work for a moment longer.

Mayor Bloomberg, we need you to get us back into our studios and back to work NOW. We have architects and fire-safety experts who are willing to file expert opinions regarding the safety of our building. We call on you to do everything in your power to save our businesses and the lives we have built at 475 Kent Avenue.

The Tenants of 475 Kent Avenue.

The clock is ticking. It will be interesting to see if a compromise can be reached or if it will just wind up being the same old story.