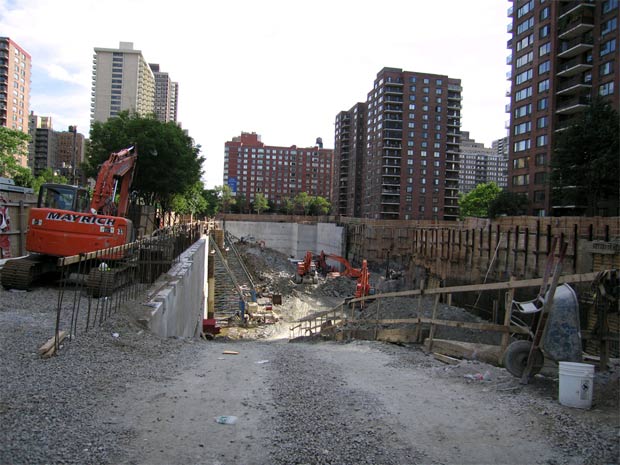 Residents of 784 Columbus Avenue are saying "I told you so" as the Department of Buildings continues its investigation into the retaining wall collapse at 808 Columbus Avenue. Residents at 784 have been complaining about the new constructions for some time and detailed how they've been wearing earplugs and noise-canceling headphones.

A wooden retaining wall at the new construction site had been shoring up the land next to 784 Columbus; when the wall collapsed Wednesday evening, part of 784's foundation was exposed, leading to an evacuation of the building. Later, the DOB found it was safe for most of 784's residents to return, save ones whose apartments are close to 808 Columbus. We hear that residents who have returned do not have gas yet.

The DOB has "logged 51 complaints about construction work" since December, according to the Post, but now the question is whether the DOB acted upon complaints properly. Apparently, on Monday, there were complaints about dynamite blasting "without proper notification" and because "buildings are not protected" but the DOB's response was "NO ACTION NECESSARY BASED UPON PHYSICAL OBSERVATION." And on Wednesday, Daily News says that just before the collapse, there were a few calls about the blasting; one person called, "Part of one of the retaining walls looks as if it is going to collapse." Resident Melanie Cooper-Leary said, "We called 311 many times." Here's a list of complaints from the DOB

The blasting is an early hypothesis as to why the wall collapsed, though the Fire Department disagrees. The NY Times reports that Manhattan Borough President Scott Stringer is holding a rally at 11AM to protest construction at 808 Columbus and plans to "ask the Buildings Department to revoke the site’s building permit because of concerns that the development may violate zoning laws."