Protesting the construction of a 72-story luxury tower on the site that was once the neighborhood’s main supermarket, about 400 people, from elementary-school-age to elderly, marched in Chinatown near the base of the Manhattan Bridge last Friday. “Vamos a coger la calle” [let’s take the street], someone called out, and the crowd, hemmed in by police RMPs and SUVs, moved into the bus lane on East Broadway, heading toward City Hall.

The tower being built by Extell at 250 South Street will make rents skyrocket, “forcing out residents and small businesses,” Tieu says a few days later. “It’s a blatant and obvious example of the destructiveness of luxury development in the neighborhood.”

Tentatively called One Manhattan Square, the tower will occupy the lot between the FDR Drive and the Rutgers Houses projects, facing the waterfront just north of the Manhattan Bridge. Condominiums are slated to go on sale in the spring. Extell purchased the site for $175 million in early 2013, a few months after the Pathmark supermarket there closed. It had opened in 1983 after community groups called for a supermarket in the area.

Plans currently on file with the city Department of Buildings are for a 72-story building, 800 feet tall, with 815 luxury apartments. Extell has also indicated it might reduce the building’s size to 56 stories, but has also filed zoning documents that could allow it to build up to 80 stories. In any case, it will be more than twice as high as the 336-foot Manhattan Bridge.

Chinatown and the southern portion of the Lower East Side are now largely inhabited by working-class immigrants, and there are several large public housing projects in the area, along with the more middle-class Grand Street co-ops. Protesters said they feared the Extell tower would accelerate gentrification.

“I grew up on the Lower East Side, and my children who were born here cannot live here,” says Norma Ramirez, 72, a former Community Board 3 member who lives in the Grand Street co-ops. “I don’t know why they’re trying to force us to move,” says Anna Wang, 21, of Chinatown, a college student whose parents are immigrant restaurant workers.

Protesters also complained that the building is being subsidized under the 421a program, a tax exemption for new residential construction that costs more than $1 billion a year, more than 90 percent of that going to luxury apartments. “My apartment floods when it rains, but the city is giving away millions of dollars to develop housing for the rich," said speaker Louise Velez, who lives in a nearby public-housing project. Michael Casiano, 26, a Lower East Side native who works as an after-school program coordinator, carried a sign reading, “Say No to Poor Doors: If We Can’t Afford It, Don’t Build It.”

In June 2014, Extell filed plans for a separate 13-story building on the back side of the lot. It would contain 205 apartments that would rent for $833 to $1,082 a month. This would indicate that the developer is seeking a 421a exemption, as the program now requires that new construction in lower Manhattan contain 20 percent “affordable” housing in order to get the tax break. (Extell won notoriety in 2013 when state legislation exempted its One57 tower from that requirement. The bill’s passage coincided with $150,000 in contributions by the company and its owner, Gary Barnett, to Governor Andrew Cuomo and a Democratic Party fund used for pro-Cuomo advertising.)

A spokesperson for the city Department of Finance said it had no record of tax exemptions for the 250 South Street site, but added that that could mean the developer’s application is still pending or the records haven’t been updated yet.

Extell did not respond to messages from Gothamist. 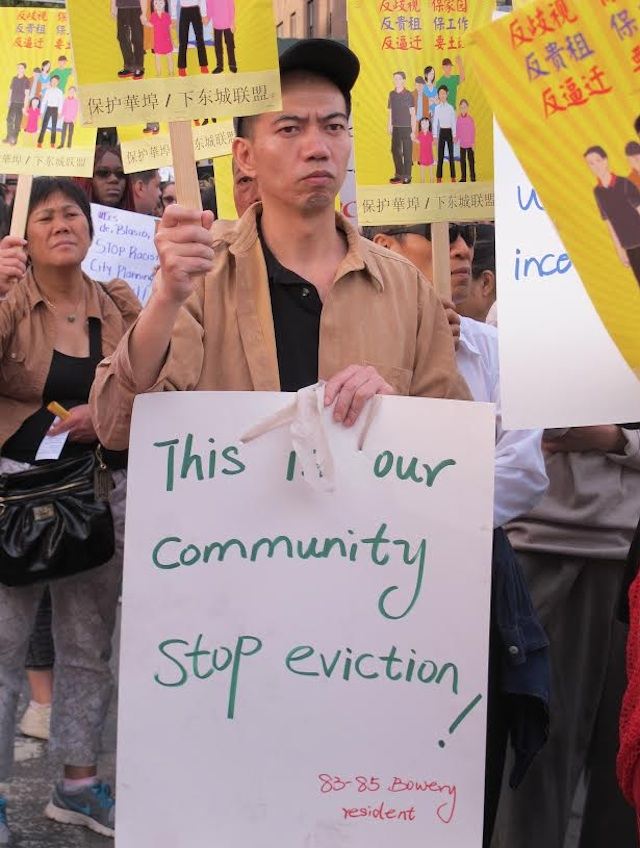 City officials say there was no legal way to stop the project. Under the current zoning of Chinatown, it is an “as of right” building, meaning that it can be built without needing city approval other than normal construction permits. That zoning dates from 1961, when city planners envisioned the financial district spreading to the northeast and thus put no height restrictions on buildings in Chinatown.

“This is a perfect example of why we need a rezoning plan,” said protester Mika Nagasaki, a volunteer with the Chinese Staff and Workers Association, a coalition member. The Extell building, the protesters argue, would have been subject to restrictions on its height, density, and affordability if the city had either included Chinatown in its 2008 rezoning of the East Village or adopted a rezoning plan proposed in 2012 by the Chinatown Working Group, a coalition of the three community boards in Lower Manhattan and various neighborhood groups.

The building “is unfortunately one of many mega-developments that are not subject to public review, or negotiations to mitigate the impact these large buildings have on our city’s already strained infrastructure and social services,” City Councilmember Margaret Chin, who represents the area, said in a statement. “That is why I am committed to curtailing the proliferation of these ‘as-of-right’ development sites.”

However, Chin did not endorse the Chinatown Working Group plan, saying that “all stakeholders—the people who will directly affected by any changes, including residents, business owners and community leaders—need to be part of the process moving forward.”

That plan would have limited the height of new buildings to 85 to 120 feet in much of Chinatown, with up to 350 feet allowed along the East River waterfront; limited big-box stores, hotels, and clubs; and required that 40 to 55 percent of apartments built be affordable to people making less than $40,000 a year. Under it, the group says, 250 South Street would have to provide 782 such apartments.

The height restrictions are important, says a study by the Pratt Center for Community Development released in June 2014 [PDF], because under the 1961 zoning, almost 80 percent of the neighborhood’s buildings are smaller than the legal maximum. That makes the area “particularly vulnerable to new market-rate development,” it said. “Increasing real estate values and development interest threaten to destroy the historic mixed-use urban fabric of Chinatown and its surrounding areas and displace the existing low-income and immigrant communities and small businesses that serve them.”

Chinatown largely escaped the gentrification that washed over the East Village in the 1980s and 1990s, but that has changed in the last 15 years. New luxury apartments have infiltrated blocks, and landlords have bought up buildings and tried to evict the older and low-income tenants en masse.

“We are constantly getting reports of tenant harassment,” says a spokesperson for Councilmember Chin. The 2008 East Village rezoning, which limited high-rise construction to major streets and required that 20 percent of the units built be affordable, “played a huge role in accelerating these changes,” says Tieu, as it pushed luxury development south into the unprotected area.

The Department of City Planning rejected the Chinatown Working Group plan in February. A DCP spokesperson says it was “too vast an undertaking.” Specifically, it would interfere with the goals of de Blasio’s Housing New York program to build 80,000 below-market apartments in the next 10 years. The plan's height restrictions and affordability requirements “would not be feasible,” DCP says, because under them, developers wouldn’t build without city subsidies. 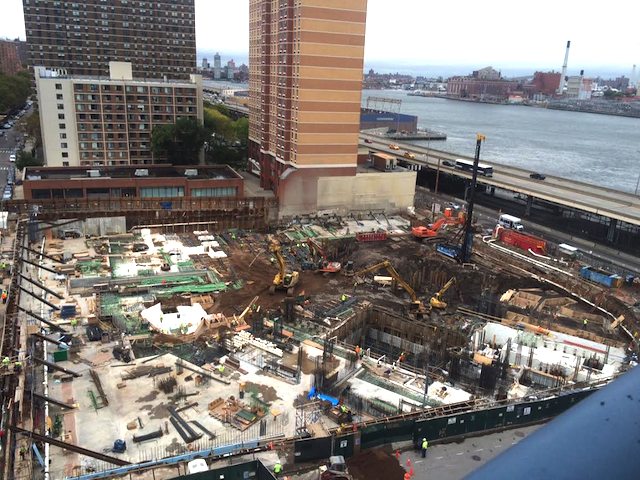 Housing New York, which the mayor has called "the most expansive and ambitious affordable housing agenda of its kind in the nation's history," has much milder affordability requirements for developers. They can include either 25 percent apartments affordable to households that make less than about $52,000 a year for a family of four, slightly less than $1,300 a month, or 30 percent that rent for less than about $1,725. While the Essex Crossing project slated for the south side of Delancey Street—approved by the City Council in 2012 after more than 40 years of wrangling over the site—will contain 50 percent “affordable housing,” that’s because the land was city-owned, DCP says. And only 30 percent of the housing built will be affordable to people who make less than $100,000 a year.

The Chinatown Working Group plan’s requirement that half of new apartments being built be affordable to the kind of people living in the neighborhood is too “far-reaching” due to the method de Blasio is using to create affordable housing.

The mayor’s program relies on using leverage and incentives to increase the trickle-down from luxury development, by letting developers build higher than current zoning allows in exchange for making 25-30 percent of the units below market. Crucial to this balancing act is that the buildings have to be profitable enough to attract developers.

The Housing New York program generally defines “affordability” as viable for households earning 60 to 80 percent of the federal “area median income” standard. But that’s based on the median income for New York City, Westchester, and Rockland counties, $86,300 for a family of four. The median income for Chinatown is less than half of that: $37,362 for a four-person household in 2013, according to the Pratt Center study. To be genuinely affordable to current residents, apartments would have to rent for less than $935—or much less.

“To me, the fact that it was considered ‘unfeasible’ is ludicrous,” says Denise Sicat Wong. More than 10,000 people signed petitions urging the city to adopt it, says Mika Nagasaki. “I don’t think any rezoning plan gets 10,000 signatures.”

The mayor's options are limited. The most direct way to create low-income housing would be to build more public housing. There are now 270,000 people on the New York City Housing Authority’s waiting list, 50 percent more than the number of apartments it has. But NYCHA, underfunded and often misadministered, has had chronic problems making even basic repairs, and a Clinton-era federal law prohibits cities from increasing their amount of public housing.

On the other hand, says Tieu, de Blasio “is supposed to be a progressive mayor,” but he “has not raised his voice against any of these obstacles.”

In a statement, Wiley Norvell, a spokesman for the Mayor's Office, said their hands were tied.

“It’s an as-of-right project. Suffice it to say, many of the changes we’ve set in motion—from eliminating luxury condos from the 421-a program to our new mandatory inclusionary housing policy—would have likely resulted in a different project were this starting from scratch today.”

#affordable housing crisis
#Chinatown
#coalition to protect chinatown
#Lower East Side
#Two Bridges
#longform
#original
Do you know the scoop? Comment below or Send us a Tip