Rescued Window Washers Have Mixed Feelings About Returning To Work

Earlier this week, two window washers were rescued after they were stuck dangling outside the 68th floor of One World Trade Center. This morning, Juan Lizama, 41, and Juan Lopez, 33, reflected on their harrowing experience at a press conference: "I'm happy to have made it home to see my family another day. I'm just happy to be alive," said Lopez, a Bronx father with five years experience in window cleaning.

Shirley Aldebol, vice president of Lizama and Lopez's union 32BJ SEIU, translated Lizama's initial comments from Spanish. "Their first priority was their safety and the safety of everyone beneath them," explained Aldebol, noting that the men ensured nothing fell from their precarious platform as they were suspended from 1 WTC. 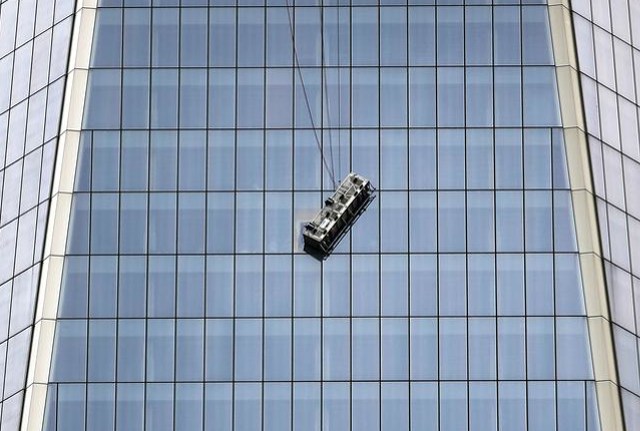 The pair started their work on Tuesday on the 43rd floor of the building and worked their way up to the 68th. Thanks to hundreds of safety training hours under their belts, Lizama and Lopez were able to take control of the situation when their platform turned vertical just after midday. An FDNY spokesman labelled the incident a "scaffolding malfunction."

"Our training kicked in immediately. We were scared for a few minutes but once we had stabilized ourselves we knew we would be ok and someone would come to rescue us," said Lizama, a New Jersey father with 14 years experience in the industry.

"It was survival and instinct for a few minutes. But we'd been prepared before the incident for any incident like that," agreed Lopez. 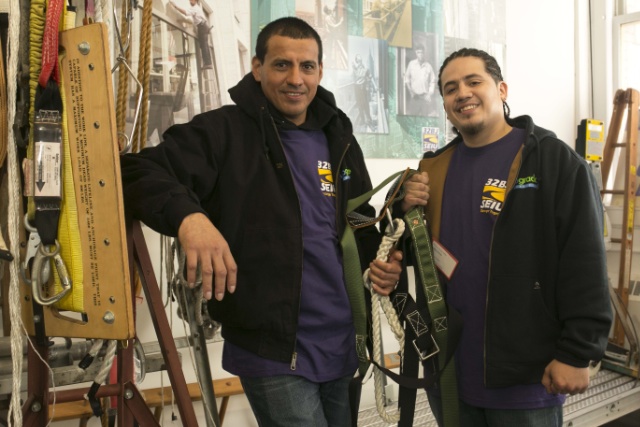 Lopez and Lizama said they had complete faith in the FDNY in regards to being rescued, with Lopez repeating, "it was just a matter of time." And indeed, the two men were rescued through a broken pane of glass about an hour and a half after their ordeal began.

When asked if they would go back to window cleaning, Lizama and Lopez were divided. "I'd go back tomorrow to the World Trade Center," said Lizama.

Lopez was more hesitant. "Uh... there's a lot of ground floor jobs out there," he said.

There was talk of the emergency stop not working on their platform—something confirmed by Lopez—but it was quickly hushed up by reps as "part of the ongoing investigation." The Port Authority has suspended all window washing operations at 1 WTC while they investigate.

Lizama and Lopez, along with their 32BJ President Héctor Figueroa, thanked the FDNY, EMTs and all involved with their rescue.

#Window Washers
#world trade center
#wtc
#original
Do you know the scoop? Comment below or Send us a Tip